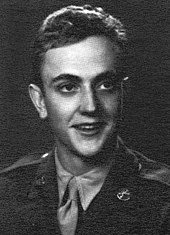 "Do you realize that all great literature — Moby Dick, Huckleberry Finn, A Farewell to Arms, The Scarlet Letter, The Red Badge of Courage, The Iliad and The Odyssey, Crime and Punishment, the Bible, and "The Charge of the Light Brigade" — are all about what a bummer it is to be a human being?" ~ Kurt Vonnegut

Born in Indianapolis, Indiana, on this day in 1922, to a previously "well off" family that lost all its money in the Great Depression. 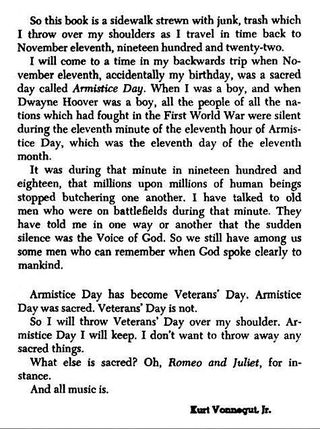 He was youngest child and always desperate to get some attention at the supper table and so he worked hard to be funny.

His novel Cat's Cradle was based on his experiences as a public relations man for General Electric in Schenectady. One of the characters, a scientist named Dr. Felix Hoenikker, was based on an absentminded G.E. researcher named Dr. Irving Langmuir, whose personal quirks Vonnegut transcribed right into his book. Vonnegut said: "He wondered out loud one time whether, when turtles pulled in their heads, their spines buckled or contracted. I put that in the book. One time he left a tip under his plate after his wife served him breakfast at home. I put that in." Cat's Cradle, published in 1963, earned Kurt Vonnegut his master's thesis in anthropology from the University of Chicago; when he was a graduate student there years before, his original thesis had been rejected, and he'd dropped out of the program. The novel also earned a Hugo Book Award nomination and a cult following.

Harrison Bergeron and the Law of Jante

The idea that the individual should be valued based only on their contribution to the collective, is one of the most detestable philosophies ever invented. From Harrison Bergeron, Sirens of Titan, Law of Jante, tall poppy, Procrustean bed or Dog in the Manger -- the allegories and lessons throughout time are not positive ones. But still the philosophy exists. And humanity is worse for not crushing it, and all who harbor it, in the name of tolerance.

An interview with himself

Kurt Vonnegut sat down to be interviewed by The Paris Review series four different times over the course of a decade. The interviews were pieced together to be published as one big long composite interview. But before it went to press, Vonnegut asked to edit the manuscript. He ended up rewriting not only some of his answers but the interviewers' questions as well, and so in the end they published an interview with Vonnegut in which he was both the interviewer and the interviewee.

He's introduced like this: "... a veteran and a family man, large-boned, loose-jointed, at ease. He camps in an armchair in a shaggy tweed jacket, Cambridge gray flannels, a blue Brooks Brothers shirt, slouched down, his hands stuffed into his pockets."

We're told that "he shells the interview with explosive coughs and sneezes, windages of an autumn cold and a lifetime of heavy cigarette smoking. His voice is a resonant baritone, Midwestern, wry in its inflections. From time to time he issues the open, alert smile of a man who has seen and reserved within himself almost everything: depression, war, the possibility of violent death, the inanities of corporate public relations, six children, an irregular income, long-delayed recognition."

In the last of the four interviews, Vonnegut's self-edited description reads: "... he moves with the low-keyed amiability of an old family dog. In general, his appearance is tousled: the long curly hair, mustache, and sympathetic smile suggest a man at once amused and saddened by the world around him.

Kurt Vonnegut once came up with a list of eight rules for writing a short story.

The ironic thing is, for all his wisdom about hate being like cyanide, he spent the last months and years of his life hating and ranting (often irrationally) about George W. Bush. Which is sort of sad commentary and a bit of poignancy about the fragility of us all. Of course that doesn't detract from the value of his other work -- it just shows we all have blind spots, and can all fall into the traps that we pointed out for others.