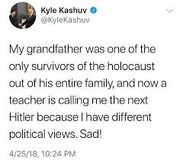 As part of the debate, Kyle went to a gun range with his dad, to get more informed and first hand experience in what he was talking about (something that none of the anti-2A students appeared to have done). So the school questioned Kyle and had problems with any kid crazy enough to learn what he was talking about before having walk-outs and marches.

To show how far public schools have fallen, one of the teacher attacked the Jewish Refugee student (Kyle) and referred to him as "the next Hitler", while in class [1] -- which is laughably moronic to anyone with enough basic history knowledge to remember the Nazi's were FOR gun control, and opposed individual liberty, free speech and the 2nd Amendment (Kyle's positions). Kyle pointed out those ironies, and the School and Teacher never apologized.

A Spirit Airlines flight attendant on Kyle's flight, embarrassed her profession and organization by lecturing passengers on the March for Our Lives and gun control. Kyle tweeted what he heard, and Spirit Airlines apologized, "While we appreciate that our Team Members are individuals, we don’t believe politics should be part of the Guest experience. We are looking into the incident and apologize to any Guests offended by these comments". [2] I'd be more impressed if they later released any information on what happened, what mitigation/memos went out, and what disciplinary actions were taken. But since there was no follow-up, I have to assume the apology wasn't sincere, and just a stunt to take the pressure off. Or they would have added what they did to rectify the problem.

After he was snubbed by CNN, where free speech only applies to far lefties, CNN was pressured/embarrassed into having Kyle on. And of course the DNC water carriers at CNN, played the role of moderate and debater against Kyle's views (something they never do to liberals). Kyle debated back, and wiped the floor with them: knowing more about guns and gun control than the best and brightest at the Fake News outlet.

When Barack Obama showed his usual divisive partisan intolerance and praised the far lefty kids, and ignored what Kyle and others had done, he snarked back about Obama's asinine PoV and scored more IQ points that Obama had. [4] So since Kyle was outclassing the "Adults", he had to start picking on kids his own age.

First he challenged David Hogg to a debate -- and to donate any proceeds to charity (Survivors of Parkland). The little chickenshit Hogg, avoided any media but that favorable to him and would feed him underhand pitches. Hogg knew he wasn't up for the challenge so went squealing away.

But Cameron Kasky (a Parkland Sock Puppet and an organizer of the pro-gun control March for Our Lives movement) agreed to step up and debate Kyle -- but after watching some video tapes, and realizing how futile the gun-control arguments are in the face of someone who is mildly informed, Cameron wisely ran-away and backed down from a debate. 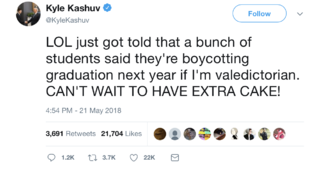 Students at Parkland are threatening to boycott their graduation if Kyle Kashuv is the valedictorian. The little trolls don't understand what meritocracy means: it's not a popularity contest little dingleberries, it’s the person with the highest grades. Kyle summed it up in a tweet:

Sadly, I give him about a 5% chance of making it even though he's #1 right now... all it takes is one fascist teacher to give him a bad grade because they are anti-2A, and they can sabotage him. And based on my High School experiences, I'm expecting he'll have to fight against bias and bigotry for every grade. (Nothing progressive teachers hate more than smart kids that don't bleat what they've been taught).