He started his careers as a Pat Moynihan's page. A classic DC joke was, "Why don't congressmen use bookmarks? Because they like their pages bent-over!" and that explains Lawrence O'Donnel's reflex for bending over at the site of any Democrat who came on his show, and being a nasty human towards those he doesn't agree with (politically or otherwise). He's an admitted, "European Socialist" and "I lie to the extreme left," (his words), so he deserves credit for being open about his anti-liberty and anti-American bias. And he's actually got a quick wit (and quicker temper), but he only uses his powers for evil. He wrote/co-wrote/helped produce dozens of episodes for Aaron Sorkin's show, The West Wing, which won an Emmy award. And has a history of being a contentious host... for conservatives. But he saves his best idiocy for his views on Gun Control, like not knowing that pistols and rifles have the same rate of fire, or claiming that because an AR-15's bullets are faster, that you can't kill them with a pistol's slower bullets? 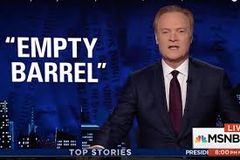 Lawrence O'Donnel (D) socialist polemic for NBC, MSNBC - while he's an ignorant socialist, nasty towards conservatives, his real enemy is guns and common sense. He's been caught saying such gems as:

Imagine you’re a teacher, and some kid is shooting people. Do you want to have a tool (gun) to defend yourself and your students or to wait for the cops to arrive, and get out from behind the cars and come in... 8-20 minutes later. He seems to think you would rather die, than use a pistol to defend yourself, just because the cops hid outside and waited for the bloodshed to be over before entering.