Legalities of a fight 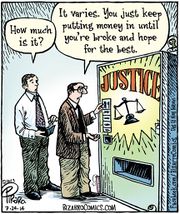 If you thought the fight was over when the last punch was thrown, you don't know much about the law and societies need for justice. Legalities are different than realities. Laws vary from state to state, and sometimes city to city. It is hard to prove "your intent" or the intent of "the other guy". So just like it is best to avoid a physical fight, it is also best to avoid a legal fight. The law rarely looks at either person as a hero... they more see two people who weren't smart enough to avoid combat, and each side is trying to prove the other side was worse.

With that in mind, if you are ever forced into fighting, it would be in your best interests to leave the scene as quickly as possible. (Unless they have your ID on file, and know exactly who you are). Returning there in the days or weeks after the "incident" would probably not be prudent.

The law will seldom see the Martial Artist as the peaceful one. In the eyes of many, Martial Artists are semi-crazed lunatics who smash bricks with their faces for fun, and are aching for the chance to prove themselves. There are many legal cases where a "whacked out Karate Killer" supposedly beat on "some poor innocent" - when the truth is that "innocent" was the aggressor and the martial artist was attacked first.

There is also guilt by association; there was a fight, you were there, you are guilty.

And it's easy to even second guess yourself (let alone others).

Lawyers are good at twisting the facts to meet their agendas. The prosecutions agenda is probably closer to guilty until proven innocent, and society doesn't like violence.

Situations vary of course - but just being in a fight offers all sorts of possibilities about "why didn't you do this or that?", "did you hit him one more time than one absolutely necessary?", "couldn't you have subdued him", and so on.

What did the witnesses see? Martial arts and boxing refs can easily make mistakes -- and they're trained and a lot closer to the action than most witnesses. Are you going to trust untrained bystanders? Do they know you or him? What are their motives?

Even when 100% righteous, there is a haze (or fog) of war; and it is hard to know what is happening at the time - let alone looking at it after the fact. Once you're in a court, you're betting that your lawyer is better at cutting through that fog, than the other lawyer is at making it. I'm not sure I like those odds.

If you want an eye-opening article, read my article on James Mitose. While that was a different time (the 1970's and after Manson), I think it demonstrates just one case where people that have ability or training are going to be held to a far higher standard than the norm. The public looks for scapegoats and people to blame, and we often blame the guy that comes out on-top. Whether you started it or not, if you are the one that looks fine, and the other guy looks like he lost a fight, they're probably going to assume that you were the aggressor. If you're bigger, were a visitor to the area, or you look in better shape, or just don't have as puppy-dog of eye's as the other guy, people are probably going to assume you were the aggressor. This is partly why in some people's mind the U.S. is seen by everyone else as always being wrong (the aggressor country) in every conflict. I don't want to be the ugly American in a court of public opinion.

Wasting time and money defending yourself in a lawsuit, that you may lose, is a steep price for vanity. If you are in a fight, don't look for any medals, don't wait for the reporters, and don't expect to be a hero. If you were a really good martial artist, you would have avoided the fight. Either way, in most cases, I'm not sticking around to find out what happens.