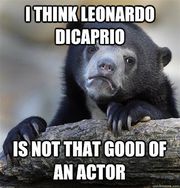 The basics of DiCaprio can be summed up as a High School dropout who made millions in superficial hollywood pretending to be someone important. Now he private-jet sets around the world, heating/cooling his $6M estates using 100 times the carbon footprint of the average family, while lecturing us at every opportunity that our carbon scraps are irreparably harming the planet. Of course he thinks a Milankovitch cycle is a fancy Polish Motorcycle, and my bowel movements know more about basic science than he does.

So again, I’m happy for him and don’t care that he’s a rich pretentious douchebag. But he’s a hypocritical and ignorant one, that wants to lecture me about things I’ve studied a lot more than he has. And unlike him, I have the intellectual carrying capacity that extends beyond memorizing lines, while having my personal assistance swaps my appointments for by butt-lift and teeth caps. Thus the only problem I have with him is when he uses winning an award for being raped by a bear on camera (something I imagine he has a lot of practice with off-camera), as an opportunity to distract from intelligent discussion on a topic, and instead regurgitates some dumb bumper-sticker sloganeering about the dangers of CO2. Then I get to care. Shut the fuck up already, or someone’s going to start paying attention to the fact that you’re the 1% you keep stupidly bitching about, and have done a lot less to earn your millions than a CEO.

In the end, I like my actors to have intelligent causes, not every dumb one that comes along, and not to be abrasive about it. It’s gotten to the point where I avoid paying for movies he’s in. Individually, it doesn’t matter, but if more people did it, we might teach the stupid thespians that their job is to entertain, not annoy their fans.