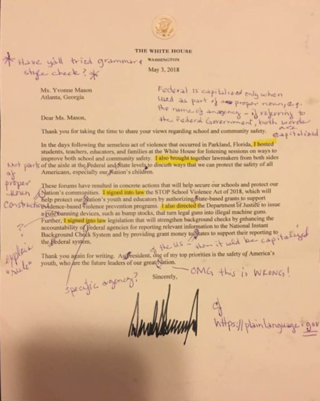 The Whitehouse responded to a teacher about her questions on Parkland and shooting, and she miscorrects him to try to prove that he's an idiot. Only her lack of research, and erroneous corrections showed who the idiots are: her and those who repeated her miscorrections without noticing they were wrong (and fit the same style that Obama and Clinton used). But if your base is partisans, things like facts won't matter. When you can't debate the merits of the facts, you can at least distract by attacking the people doing it, or their punctuation. It plays well with the gullible and partisan, while the other side recognizes it for what it is (stupid partisanism). Hey, if Democrats could grow, then the party would have ended with Andrew Jackson and the Indian Massacres.

An unaccomplished English teacher (Yvonne Mason) decided to correct the WH's letter, poorly. When I saw it, I thought: typical divisive progressive hate-monger, this will appeal to the gullible and partisans, and work against her cause with everyone else. Here's a few items of note:

I don't always like Trump's style. But every time the left does something more hypocritical, abrasive and wrong, it reminds me that compared to the alternative, he's a saint. And in the end, the English teacher has nothing intelligent to say about Parkland, the shooting, what the Administration did, so she tries something she's less incompetent at: English -- and fails at that.

Since they can't attack what he actually accomplished (in spite of their warnings) -- they instead attack that he's not competent to do this. Because improper comma splicing is more important to them than ending a nuclear threat if it is the other side's accomplishment. If the other side did that stupidity back to them (and one could), they would just use it to show how petty the other side is. In the end, she didn't like how WhiteHouse style guides capitalize words like State, Federal, and so on -- but that's the style they've used for decades, including the Democrats that she didn't correct, or the media failed to report capitalized things the same way.