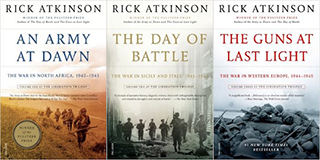 He won the Pulitzer, and his writing (and reading) is quite good. It's easily readable (or listenable). What he's done is pieced the battles together not just from historical accounts, but from personal letters of those involved, to tell many very individual views of the war.

An Army at Dawn looks at the 1942-1943 Allied invasion of North Africa, blooding themselves and disproving themselves of the myth of the invincibility of the 3rd Reich. Along with going into details on the petty bickering and political power struggles and incompetencies of the British and American commanders.

The Day of Battle: The War in Sicily and Italy, 1943-1944, looks at the forgotten war within a war. Normandy, the Bulge and North Africa are more often written about than the conquest of Italy. (And the trials and tribulations involved). And in many ways that makes this book the most interesting (least rehashed) of the books. Atkinson makes the case on how the Mediterranean campaign was more than a distraction, it diverted and drained resources, denied a supply chain for the Germans (while securing it for the allies), and lead to the inevitability of the later outcome.

The Guns at Last Light: The War in Western Europe, 1944-1945 is the most often told parts of the war. Basically, "Saving Private Ryan" -- from the landings and Normandy, through the bulge and through to the end of the war. With a lot more detail and diversity than a single persons point of view, of course -- and his usual focus of quoting letters and telling stories from various men who are destined to die.

He's not very concerned with the mechanics and weapons of war: their relative strengths and weaknesses, and how that influenced tactics or strategies. He tells stories about people, and politics. Sometimes a little too narrowly. But there are anecdotes, details, and a tellings that you don't get from other books. He loves the color and the humanizing of events, putting you inside some of the smallest of struggles, inside the historical context of the world's biggest war.

There are omissions in what mostly lies outside the scope of the books: what lead to the war, what was going on in the Pacific or Russia that was influencing Africa, Italy and Europe. What were the ramifications and closure for the few people he talked about that didn't end up dead? A lot of the dynamics between FDR, Churchill and Stalin (what geopolitical pressures were influencing them at home, etc), are glossed over -- while the details of how they arrived, left and other minor topics are covered in detail. So it's wonderfully comprehensive on what it covers, but not without blind spots, or at least with a pruning of scope that still leaves many open questions and issues.

Yet, despite it only being able to cover so much, it's a very good series. Beyond the biases of the individual and political (sometimes to the detriment the cultural and philosophical), he tells a really good story (or series of them) -- though he's often a little flowery with the prose, and isn't afraid of technical marshal terms that you should know the meaning of, or lookup. Still, he captures some of the essences of war: men fight for themselves and their buddies and to get out the shitty places their lives led them to, than for the honor or glory that got them to sign up. War is a series of incompetent decisions, made with partial and inaccurate information, resulting in a series of SNAFU's and FUBAR's. Long periods of tedium, punctuated with brief (but seemly infinite) periods of terror and chaos -- all floating on a tide of bureaucracy and incompetence. He wants you to know how vile, foul, stinking, putrid, dirty and corrupting war is -- so he vivisects history, and lays it bare on the examining table.

If you care about WWII History, this is a series that will be quoted and referenced for generations.