Lies the Government told you 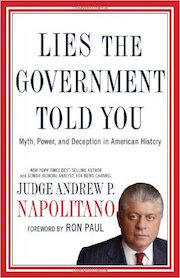 I was listening to audible book on my walk home (Lies the Government told you), by Princeton Grad and ex Superior Court Judge Napolitano. (Good read/listen). Some of it is rehash (if you're a politico, especially libertarian), some goes into more detail.

Napolitano will give you lots of truths, but he's not above leaving out context or balances to give you the Libertarian side of things. So it's very informative, provided, you're going to check out how the other side feels about any issue he's addressing. But he's not always completely fair and balanced.

But an example was he went into the 17th Amendment (changing the Senate to Direct Election, instead of being chosen by States).

It was a refresher on things I knew about the 17th amendment (1913): before that the Senate was elected by the states, after it, they were elected directly by the people. Ya ya, I knew that. I'd been taught something mind-numbing dim about it in school: it had been unmanageable before and this offered more direct representation with more democracy = better, and all that. It was such a load of horse shit, I never cared or paid much attention. It seemed like a minor nuance in governance that was just a technicality and could be ignored. My bad. Napolitano dives a lot deeper and reminds what it was about originally, and what changed.

The reason the Senate had been setup the way it was, is because the people got direct representation through congress (the lower house). But the upper house (the Senate), was so that states (as a group) had direct representation to protect against federalism. The state legislature appointed two Senators to protect against the Federal Government encroaching on States Rights and Interests (or the interests of the entire people of the State). So instead of the people's representatives passing laws, you had both the people AND the States representatives passing laws.

The progressives prefer federalism and the tyranny of the majority -- so to them, the more direct democracy is best (3 wolves and a sheep voting on whose paycheck is for dinner). So they pushed to get the old system "simplified" (use a few exceptions of corruption as an excuse) -- and viola. We replaced having two separate interests, the people and the state, replaced with just two flavors of vanilla (the groups representing the people), all directly elected.

So what did this progressive solution lead to?

In the end, adding the 17th, made things a lot worse. Instead of two separate views of a law, you had two groups of legislators beholden to the same special interests -- and the special interests got more power, because of progressive federalism.

This was one of dozens of examples of progressive ideas that only made things worse. Which got me to thinking about the famous quote:

"We all want progress, but if you're on the wrong road, progress means doing an about-turn and walking back to the right road; in that case, the man who turns back soonest is the most progressive" '~ C. S.Lewis

If a progressive got their way, and something got worse, then they might not get their way again. So progressives tend to both ignore history, and re-invent it into something that makes things not look so bad (for them). This is exemplified by the fact that Progressives have gotten more and more power since the 1900's, and things have been getting worse and worse for the public, and the've fought ever reversal. (Even obvious ones like prohibition). The obviously solution is to STOP listening to their bad ideas (since the prior ones didn't work). Thus for people that know history, progressives should NEVER be able to run on, "things are bad, I'll fix them". Because most prior previous progressive fixes just failed, and made things worse. But I digress.

The point is the book is interesting and touches on some fascinating history. Some is refresher, some is new, but it's worth a listen while on a commute, that's for sure.