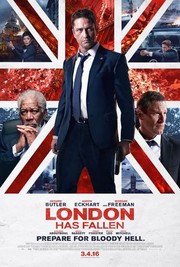 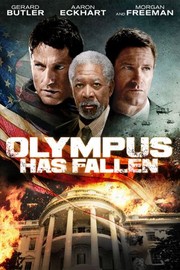 Sometimes, I feel like the chick in the family. My wife watches the football, and enjoys a good action flick and suggests we go to see them. This was one of those movies, "Let's see London has fallen". OK.

We hadn't see the anchor movie (Olympus has fallen), so we had to watch it on TV: they were kind enough to release it to TV the night before. It can best be summed up as Die Hard in the Whitehouse. Same attitude, cheesy lines, plot devices, and attention to accuracy/physics/mortality (ahem). And best of all, no Joe Pesci (yea, I know, that was Lethal Weapon, but does it really matter?). You aren't watching this for the believability -- you're watching it because you want want an action film, with good ol' indestructible good guys, shooting, stabbing and otherwise committing mayhem on the plethora of fodder, known as the bad guys -- with just enough backstory to assuage any guilt over watching a bloody video-game on the big screen.

Last night, we watched Olympus has fallen first (of course), and saw Presidential Guard (and Presidents best buddy?) Mike Banning playing the role of John McClane as a Secret Service agent -- while the WhiteHouse is taken over by a perfectly coordinated terrorist army, who destroys models of the Whitehouse and wants to setoff a doomsday device. Yeah, you don't go in expecting original, or plausible, you just gotta roll with it. The TV edited version was of course hacked up with, "Gosh darn it!", and cuts at the gory money shots. But got the gist.

They don't really bother to explain why the terrorists are doing it, much about their objective, just cartoon bad guys. Not deep. Not horrible. Rotten Tomatoes gave it a 48/67 -- which means the audience was fine it with, but the Reviewers thought it was celluloid toilet-paper.... of course the thing comes to mind, why can't it be both? Enjoyable, and no depth at all. Die Hard in the WhiteHouse.

Then the main event

So today we went and watched the sequel (London has fallen) with a friend. John McClane goes to London. New scenery, same plot. Impossibly well organized, large, and highly trained Pakistani's take over London, blow up most of the sites and try to kill all the world leaders. A slightly higher budget excuse for violence -- same plot, more chase scenes -- and without the TV editing, a lot more F-bombs and one-liners. I should have said spoiler alert, but you probably know this was where it was going from the teasers or title.

Lots of cliché's, tricks, completely expected plot twists. But it was more enjoyable on the big screen. He was a bit more stabby on the big screen that he was on TV. (The not-edited for TV version plays it with crunchy-squishy sound effects. Many chickens gave their carcasses to the sound studio specialist). And the rotten tomato reviews got even more snobby about the sequel, giving it a 26/63. Meaning the audience still got what they expected, but it was even less artsy (and more politically incorrect) than the first one.

I think the reviews are idiots over the whole anti-lefty, good guy americans killing the evil brown-skinned people thing that sets off their PC reflexed to hate it -- yet it's no difference than Arnold killing White-Russians, or Sylvester killing Asians. If the same scenes had been done on Wall St., or blacks killing whites (aka Django Unchained), with it's dumber plot and worse filming, it would have probably gotten the 88% reviewer approval that film managed.

In the end, it's a solid bloody shoot-em up, continuous chase scene movie. Bad guys are going to die, lead character good-guys are going to live (with a few heartfelt sacrifices and dying utterances to justify them being mad and violent). And it's going to be a machine gun opera. Sort of Bollywood with lots of red-dye filled squibs. If you don't like those, you'll hate it. If you want to see this mindless fluff, you won't feel robbed.