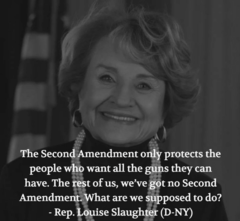 (D) - NY Congresswoman. The appropriately named 13-term congresswoman blamed the Second Amendment for violent crime, saying "Americans aren't safe anywhere" and gun control "has to be done" to protect citizens from themselves and their constitutionally guaranteed individual right to own a firearm. Then she made one of the dumbest quotes since Maxine Waters learned to speak. "The Second Amendment only protects the people who want all the guns they can have. The rest of us, we've got no Second Amendment. What are we supposed to do?"... I don't know, respect other people's choices, rights and liberty? You could try that.