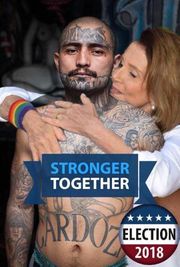 Trump started another scandal by telling the truth. He was talking about the need to crackdown on violent street gangs, which are partly fueled by illegal immigration, including ones like MS-13 (Mara Salvatrucha). And he said some of them are Animals. New York Gov. Andrew Cuomo called them all thugs. And the left/media, which has no problem calling Trump or Trump supporters animals, said that the use of animals for violent thugs was too harsh and should only be used on patriotic Americans who disagree with them politically.

The term come from El Salvador:

There are up to 50,000 members, with about 10,000 in the U.S. Of course the far left blames their culture on America, and immigration policies (exporting criminal illegal aliens) -- while ignoring the origins of the culture or violence. The idea that Christian missionaries and Mormon's are often kicked out of countries and treated worse than El Salvadorans were, but they haven't turned into a criminal gangs of murderous thugs, seems to completely escape the left's reasoning capacity. Hey, when your only tool is a hammer, every problem looks like a nail. So to progressives, every failure of their policies (like their immigration ones), is the fault of not following their policies of hypocritical compassions, even more.

The enemy of my enemy

One of the dumbest philosophies out there is "the enemy of my enemy is my friend". Democrats embrace that with colluding with Russia (on many occasions) to undermine conservatives and elections. And in this case, when Trump said he opposed MS-13, the Democrats immediately embraced them... they're just misunderstood. Or other mental gymnastics to blame that gang on America income inequality or some other stupid intersectional Marxist excuse, rather than admitting the truth: that divisive tribalism sucks and tears society apart. Whether that's progressive gangs in colleges attacking people from violating their safe spaces, or speakers who challenge them to think... or it's their violent illegal alien voters (base) who want to use violence and terrorism to control the masses.

Either way, the Democrat and media's embrace of MS-13 tells you what side they're on... and it's not the side of Americans, the law, tolerance, or our national interests. It's any excuse to rationalize attacking those they don't like, or justify people they more associate with. And like a few of them said publicly, they'd rather have their daughters marry violent gang members with no futures other that prison or a casket, than have them marry conservatives.

I don't think the DNC is really all MS-13 apologists and sympathizers. I think many of their leadership (and followers) are so into their one-upsmanship virtue signaling, that they're so busy showing how much they hate Trump and everything he says or does (no matter how good, right or righteous it is), that their knee-jerk reflex to attack him or defend his targets exposes the bigger issue. Which isn't that they support criminals over society (though they sometimes do), it's that they're so busy trying to show how much they care, that they don't actually think through what they're saying/doing (or what the consequences of their actions would lead to). And then they're so nose-blind to their own dogma/stench that they don't realize how they come across to more reasoned (less reactionary) folks.

So they see themselves as always the protectors of human rights and dignity. While those of us who get the broader context see them as willing to defend human traffickers over conservative values. I mean sure, they'll rape your daughter, and cut your son to pieces, but at least they won't vote for a guy that tries to inject some balance into the immigration problems... and that's what's truly important to them. (Not what someone does, but who they vote for).