Man in the High Castle 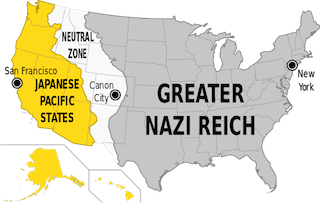 This show had a fascinating premise: what would have happened if the Axis powers won WWII? I love thinking about "what if's" like this, so I was a little let down with season 1 and thought the attention it garnered was overrated, but season 2 made it worthwhile.

Basically, the axis powers divide up the U.S. between Nazi east coast and Japanese West Coast, with a lawless neutral zone to offer safe haven in-between (and pretty much the whole world like that).

Season 1 was slow, a bit depressing, but interesting. I had interest in the backdrop and the how/why of what other cultures controlling us would do to our own. How would progressive crony national socialism (Fascism) influence our society? Season 1 barely touched on the sociological implications and are more a normal spy/rebel drama/thriller, with overlapping conspiracies, personal interest stories (about a few lead characters), all set in dystopia. And most of the “drama” is about the immediate fears of capture and torture, and not a lot about how the environment/government/realities of existence work. The dribs and drabs of background they leaked had some confusing contradictions — with a few nice details. Military related technologies have obviously advanced a lot, but consumer conveniences haven't kept up, many people seem struggling to get by, while they have supersonic transports, 50’s manners, and things are a lot more formal.

Incongruity: One of the things that bugged me, is the Nazi's dropped an atomic bomb on DC, and then the U.S. capitulated? (That's the hint). But Germany knew they were destined to lose, if they couldn’t win big early — and they were losing from the moment the U.S. entered the war. One atomic bomb (if they could have gotten it to the U.S.) wouldn’t have changed that. So how did they win?

As a series, it's not bad. But beyond a few good visuals, reasonably good acting, some nice attention to detail, and hints at something bigger and far more tantalizing than what they’re showing you, it’s all foreplay… and it feels like a Hollywooded version of a book (a few too many close escapes, blind spots, lucky breaks and coincidences, to try to increase the tension), and it gets where it's going at a snails pace. So I'm mixed. Worthwhile for the possibilities, but below its potential for what I wanted it to explore.

Season 2 addressed my complaints from Season 1, and then so. They far more go into cultural impacts of WWII German National Socialism and what it meant for society. They hint at what fascism was: about replacing classical liberalism (liberty) of the western culture (British/American and to a lesser extent French values), with a top-down socialist/collectivist/statist command hierarchy, where family/nation/state came first, and your value was measured not what on what your country could do for you, but what could do for your country. The consequences are, the the trains run on time and there’s low crime, but there’s a barbarity/contempt towards those who don’t fit with the collective ([Harrison Bergeron and the Law of Jante| the law of Jante]). Even religion (or the state as the religion), and the Machiavellian power struggles that come with communist/socialist/fascist centralization were represented.

They do similar job with the Japanese states, and their lower regard for human life results in even more friction, and more contempt for those that align with the pon’s (likely short for Nippon’s, because using the more time appropriate term “nips” for the same contraction, is still considered too insulting). But either way, there are frictions and consequences that come from a world divided by two egocentric, racially superior, and nationalistic super-powers.

The results are the stories of the people that play out in Season 1 are far more interesting to me, within the context of observing the world around them, and how they're all played, and playing on, the systems they’re forced to live in.

It's a little confusing with multiple timelines and universes happening in interwoven stories. And there’s a unexplained thread about where films from alternate universes are coming from, or how a few people can remember things from another reality. The little "making of" 3 minute reviews that went along with season 2, to explain each show from the executive producer’s point of view, turns out to be a great addition and lets you recap the story you watched and get a much better understanding. (They are worth watching).

Season 1 had Reviewers and Audiences liking in 95/89 (according to Rotten Tomatoes). Season 2 had Reviewers going full butt hurt over the political correctness, while Audiences liked it a little more 62/90. One reviewer was whining that with Trump running for President, they couldn't stand watching Americans "Sieg Heil'ing" each other (or at least that's what I read into his trashing).

In the end, Season 1 was still just a spy mystery in an alternate unversed. Interesting, but not compelling by itself. But Season 2 was not only a better spy thriller, but it introduced far more of what this universe was about, and brought the series from another middle-of-the-pace implementation of an interesting premise, to something that could be watched and thought about, more than once. A gory peek into what progressivism (an all knowing and all powerful government, lead by a brain trust with the values of collectivism and unity over the individual rights) could have lead to, if the U.S. had not existed, or had wavered.

The show uses offensive slang and imagery, you know, like History does. While watching season 1, I thought, "all the historical accuracy, is going to drive the politically correct fanatics nuts”, and I was correct. The show in season 1 used anachronistic terms like “Jap" and “Nip", even “Negro” — gasp. I know, Historical accuracy is too much for many safe-space snowflakes of today, and this was “Fixed” in season 2, with replacing terms like “Nip” with “pons”, though they still used “negroes” once. Like in telling a story about how it’s OK to exterminate people based not their race/religion/design for liberty, but it’s not OK to use bad names? Fucking whiners. But I guess if you want millennials to watch something, you have to revise history for their ignorance-based sensibilities (or that's what the studios think anyways). Just like they’ve been doing with their attempts to outlaw the confederate battle flag, or even allowing conservatives to speak on college campus's.

Here’s a few people getting touchy towards the topic: