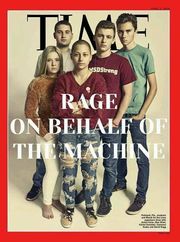 #MarchForOurLives was likely a major setback for the gun control movement. Not that they ever had a chance in hell of getting what they wanted. But it was caustic, abusive, the alt-left exposed their true contempt and disregard for the facts and other side (letting the truth slip out is never a win for them). Less than half the expected attendance showed up. And the ramifications are that now that Generation TidePod let their children rant cathartic at their misunderstandings on life, and we can go back to ignoring the uninformed children (and adults) until they grow up, and can get their basic facts right. (And as some older gun controllers prove that may be a very long wait).

Democrat Politicians don't actually want to fix things. If they did, they couldn't campaign or raise money on how evil the other side is (for allowing this to be broken), or on how you need them to fix it. They had all 3 houses during Obama's first term, didn't get near this topic. They only scream about it, when they stand no chance of doing anything, and they try to fix the wrong things to avoid losing a campaign cash-cow for themselves. So they play both sides, undermining things that would help, while pretending to care.

Look at this MarchForOurLives -- they know that this cause can only make things worse -- but they support it because the goal is to inflame the base and get voter turn-out. But it rarely works in their favor. Kids rarely vote, and the numbers are more divided than the vocal minority would lead you to believe (it's like 60/40 on gun control amongst the 18-24 crowd... and more the other way in the higher turn-out older crowd). The alt-left has to keep shifting attention from each failed meme to the next: Trump hates Russia, Women, Immigrants, LGBTQ, to kids (as proven by not doing what Obama and the Democrats didn't do when they had the chance).

And the results of this little snowflake meltdown:

So what did we learn about caustic sock-puppets accidentally telling the truth? Trick question. If the alt-left could learn, they would be extinct. They have to be close minded finger-pointing emotional children, or they wouldn't have any attention at all.

One of the loudest sock puppets for the alt-left in the #MarchForOurLives, here's a High School kid, that parlayed being near a school shooting, and a radicalized ignorance on guns and gun control, into having the short term love and adoration of the far left. Of course these fad activists come and go, and tomorrow he'll be forgotten like any secondary activist in a leftist cause, or Hollywood C-list celebrity. So long and thanks for all the clickbait.

One of the student speakers let the truth slip out on Saturday: "We will take the big and we will take the small, but we will keep fighting. When they give us that inch, that bump stock ban, we will take a mile. We're not here for bread crumbs. We are here for real change."