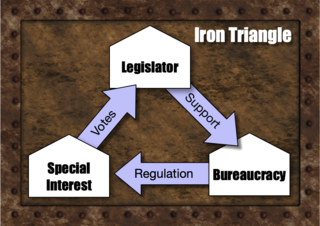 If Ike were alive today, the same speech is more valid today than it was back then — just replace Military Contractors colluding with politicians to create problems for them to solve, with Poverty Contractors, doing the same with Social Programs. In both cases, we should measure their successes no by how many people they can claim are in poverty (or wars that need to be fought), but how many they can get out of poverty (or avoid by diplomatic means).

It was 50+ years ago that Dwight D. Eisenhower (Ike) warned us about the "Military Industrial Complex".

You hear the phrase in the media or in many political conversation, but what does it really mean?

The concept is pretty easy, it is when government (Congress) colludes with a special interest (defense contractors), in order to support a bureaucracy (the Military/Pentagon). The bureaucracy of course gives favors/contracts to the special interest group, who pays off the congressman with money or votes, which give the bureaucracy bigger budgets. They all work together, knowing that their personal rewards depend on them keeping the money rolling in to the others. It is what is known as an Iron Triangle (1). The concept wasn't new when Ike spoke about it in 1961 either, Ralph Pulitzer (yes, the Pulitzer Prize guy) talked about it at the post WWI Paris Peace Conference (1919). And I'm sure that kind of corrupt collusion goes back to the ancient Greeks, if not Cavemen.

To learn about anything, I like to go to the source. What did the speech actually say? It's a brilliant speech and I recommend you read it in it's entirety (2). But I'll paraphrase it for brevity,

To hear teachers and the media today, you'd think his point was that we should decimate the military, become isolationists, and avoid wars. Yet his actual point was that while we need to keep vigilant in national defense and keep a large standing army, and use that army to promote liberty. But we also need to watch-dog against two things:

Those last two key points are often lies of omission ignored by the left, based teachers and the media, but are the whole point.

So how are we doing? it turns out the Military is not the problem.

In 1961, we had about 3 Million active duty armed forces (183M population) (3). In 2019 we have about 1.3M (327M pop), despite being involved in more global conflicts. So things got a lot better, not worse. A population adjusted graph for the size of our military would look like the following (or a little softer difference if you threw in reserves):

How about dollars spent? He was warning about that as well as just influence(3). Well, in 1961 we were spending about 47% of total federal government spending on military spending, today it 15%. (Or as a percent of GDP it went from ≍10% to ≍3%). Again, trends got a lot better

Other things got a lot better too.

The biggest concern Ike was warning about was that in 1961 was the "unwarranted influence" of a very few companies getting all the defense contracts.

Even how much of the military budget was procurement (the part most manipulable by politicians), dropped from ≍40% of the total defense budget in 1961, to ≍31% today.

So when it comes to the military industrial complex, we either had little to fear, or we were able to control this problem just fine (since every aspect has gotten better, relative to our economy).

However, while the military industrial complex got a lot smaller, the primary thing he was warning against (deficit spending, debt, political corruption/collusion) all got worse. Deficit spending went from 4.4% of total spending to about 33% today (≍8 times worse). See the graph to get an idea of the problem:

Well if all his warnings came to pass (deficit spending, borrowing from our future, throwing money at every good sounding cause), and it wasn't the Military Industrial Complex that caused it, then what was the cause?

While Military Spending (as a percent of GDP) halved or more, spending overall tripled (from about $11K to $29K/household in inflation adjusted dollars). Since 1970 (when these programs really started kicking in), government spending went up 10 times faster than median incomes (5). Where did all the money go? Federal Social Program Spending went from 2.5 to over 10% of GDP, and over half of the federal budget) (6) -- that's not even counting welfare, or state and local contributions which would make it bigger.

Why can't we control spending on social programs?

Of course there's a lot more reasons than just those. But the point is the things Ike was warning about were fixed for Military Contracts, but are endemic to Social Programs.

In the 20 years before the Johnson's "Unconditional War on Poverty", we dropped the rate of poverty from 30% to below 15%. In the 50+ years since Government took over charity, we've spent $22Trillion, or 6x as much as all our other wars combined. The results? Poverty has remained flat at 12-15%. But before that only 7% of American children were born outside marriage. Now it's 41% -- and that's the single largest contributor to poverty. It doesn't matter if this is incompetence or malice, what matters is government is not a good tool for fixing problems, because doing so incentivizes them to perpetuate them. [1] 14.5%

Total federal spending on social programs has grown tenfold or more, from consuming a few percent to significantly over half the entire budget and on track to consume the entire budget by 2049 (if you ignore interest on the debt it created otherwise it's much sooner). So we've spent conservative $10 trillion on the war on poverty since the mid 60's (just medicaid and welfare, if you throw in all the other programs it's likely around ≍$37 trillion+), and yet we have roughly the same 14% poor as when we started (7). Click the graph if you want to see the trend. Things were getting better, then we poured more money in the 60's, and they flattened out. There became a monetary incentive to NOT fix the problem.

Remember when Ike warned not to chase every pipe-dream? This is what he meant. We could give every poor family today almost $1,000,000 for what we poured into helping the poor already, and yet we can't show any trends towards success?

The proponents claim it could have been a lot worse without these programs, but there's no evidence of that (it was trending better before we discouraged work, and rewarded the wrong behaviors). Economists rationally point out that the burdens on society caused by financing these programs seems to have put or kept as many people into the poor house, as it has ever helped out. If you throw a fuckton of money into something and get no measurable returns, the question is shouldn't you reassess either the problem or your so called solution?

So why do we still do it?

Even for daring to talk about cutting only the growth rate on some of these social programs causes many to go into apoplectic fits. Plans which just cap growth (not even cut anything) are attacked as vicious and cruel.There's collusion between federal legislators, the media, and the special interests, that we can't even question if there are ways to improve the process without demagogues labeling us as bigots, racists, classist and genocidal maniacs, and showing ads with them throwing elderly or indigent off of cliffs.

So what should we learn?

Why? Because our culture (the left especially) are a bunch of suckers for a good sob story.

When you read Ike's actual words, instead of the ones taught in school and through the media, you walk away a lot smarter, realizing that he was a fiscally responsible conservative. Heck, today, he'd probably have been a "Tea Partier". The first part of his speech is about defending U.S. interests (and expanding liberty) which sounds a lot like the Bush Doctrines on Global terror and promoting democracy. And the last part of the speech was a warning against rampant spending -- the antithesis of Obamanomics.

Ike warned against the exact problem we had as a culture, he just missed on which sector would cause the biggest issue. If Ike was leaving office and giving his farewell speech today, which do you think he'd warn against more? The military or the poverty industrial complex?