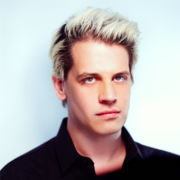 Milo Yiannopoulos is a flamboyant gay conservative tech-journalist, entrepreneur, public speaker (whose Dad is Jewish) -- that partly came to prominence around gamer-gate. He is a free speech fundamentalist that was attacked on the college circuit for things that didn't fit with far-left progressive politically correct movements, and he became the strident voice of the young counter-culture right/conservatives on college campuses with his "Dangerous Faggot” tour.

In the name of tolerance and free speech, the left has tried to shut him (and many other conservatives) out of many venues, but his popularity and fan-base seem to figure ways around the restrictions.

Milo and the Alt-Right

Milo Yiannopoulos hasn't self identified as alt-right, but the style of his speaking (razor wit, on target observations about the hypocrisy of the left, mixed with a few catty slurs and provocative ideas) means his dogma rips the fenders off their karma. And thus he’s kind of a personification of what the haters mean when they use the term “alt-right”, and they often refer to him as the spokesperson for Alt-Right. In no small part, because Milo wrote an article (Guide to the alt-right) that laid out who the alt-right are, and what they stand for, in a not completely flaming-lefty intollerant way. So that made him an alt-righter-by-proxy.

An openly gay white kid, with a penchant for cocoa-colored partners, representing the racism and homophobia of the right, is an irony that flies completely over the heads of the haters calling him and all conservatives old-white homophobic racists. The same way they barely noticed that one of the more enthusiastically welcomed speakers at this years Republican Convention was Peter Thiel: a gay entrepreneur, outted by the tolerant lefty rag (Gawker). If the right really was the homophobic-racists that the left claims, don't you think they'd have more problems with Milo practicing affirmative action in his bedroom, or with Andrew Breitbart joining GOProud on their advisory council? 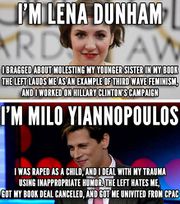 If you want to get an idea of what Milo is about, you can watch a few of his highly popular videos. He reflects, destroys and mocks everything thrown at him by the far left: feminism, islamists anti-semistism, social justice, and so on. He’s like Jon Stewart or Bill Maher, if they were smarter, better looking and more honest about what they stand for. But he's also a lot more caustic and leans more towards Maher or Samantha Bee or one of the dozen other abrasive women-of-the-left, than the more polite propaganda of Stewart: https://www.youtube.com/user/yiannopoulosm

Now because Milo wrote for Breitbart.com, and Breitbart.com was willing to give him and others a voice against both the left and against traditional conservatives (and that’s where he published his guide), then all of Breitbart got pegged as part of alt-right as well (even though most of their articles are a mix of both a mix of establishment and anti-establishment, as are the authors). And because Steve Bannon was executive chairman of the board at Breitbart, then Steve became labelled as alt-right as well.

Here is an interesting interview (long, needed some editing/tightening) that he did for NPR, but they seemed to have refused to air, because it showed him as NOT what NPR and/or the far left wants to believe he is. I hear more bigoted things on NPR daily That doesn't make him a saint, or me a fan, just that those usually attacking him, are flamingly ignorant of what he actually says and thinks, because they hear, see or read things through the filters of "their" media, which censors uncomfortable truths and preaches comforting lies for them. And that's what bugs. So you can dislike Milo, or his causes for free speech (by being as offensive as Lenny Bruce or dozens of other comedians), or being an advocate against social injustice masquerading under the false flag of social justice, but if you're going to hate him (in the name of tolerance), hate him for what he is and says, not for an imaginary caricature of what you've been told to think he is.