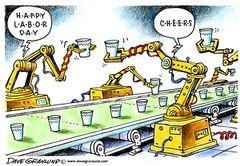 Minimum wage or Automation Malthusianism is a variant of The Broken Window Fallacy or Milton Friedman goes to China.

Value (Money) is derived from the product of work (productivity/results), not based on what you paid for it. You can keep raising your costs for something by paying more, but unless productivity/output is growing at least that same amount, then you’re not coming out ahead. The MORE you have to pay for a burger or a bridge, the more the economy loses (the velocity of money slows as the money is getting consumed for less productivity/output). Thus investment slows. There’s no way you can pay more, and get less in return, and make it up in volume, despite what Krugman tells people. The cheaper it costs you to get something done, the more time/money/productivity you have left over to do other things: e.g. spending it on improving the company/economy in other ways. It’s a variant of the broken Window.

Automation is the other side of the same coin: visible costs with invisible gains. Every job that you replace with something more efficient (less expensive and better), the better the macro economy becomes. But people see the lost worker, not all the savings to all the consumers. You not only made more goods for less money (which means more people can afford them, and all of them get a little more left for other things), but you freed up labor (workers) to do things more beneficial for society (even if that’s just free time). Almost everyone wins.

But what about the workers that lost their jobs?

While there are certainly a few casualties, MOST that lose their jobs, lost a dull, repetitive, and menial job, and can go on to doing something better and more meaningful (and hopefully more valuable) with their lives. So, on average, more will benefit in the long term, even if they lose a little in the short term. Since there are more consumers than producers, in a macro-economic sense, the benefit to the many more consumers could still be a net win for the economy, even if those producers never produced again. This is why when we shipped jobs to China (with cheaper labor), a few people lost their jobs, but all of us got our goods for cheaper prices, and the economy grew during that outsourcing. Micro we might lose (if it’s YOUR job, it’s a bigger deal), but Macro we win (since you buy those goods/services for less). There’s another econ fable that goes, “a recession is when your neighbor loses his job, a depression is when you lose yours”. The truth is it’s just narcissism getting in the way of thinking broader than ourselves (and thinking of economics)

Michael Moore (a propagandist) did a faux-documentary called Roger and Me, about all the lost jobs at GM during the late 80’s. Ignoring all the lies and deceptions in the film, Michael Moore went back and talked to some of the folks, a few years later in Pets or Meat: The Return to Flint (as did some others), and what had happened? Most of the people talked about how much better their lives were not working in that damn factory, the creative destruction that destroyed their old jobs also got them off their asses and into something better. So in the micro, they thought their lives were ruined. In the macro, most (but not all) of their lives ended up better a few years (or decades) later.

So in the big picture, the gains surpass the losses — but that doesn’t stop the chicken little’s. They’ve been predicting this doom and gloom for the entire history of mankind:

Every productivity improving device brought out the naysayers. And decades later, we know it enriched far more lives than it harmed. This is repeated over and over again, throughout history, Malthusian naysayers telling us that industrialization or population or pollution (CO2, etc) would destroy our economy and displace all the workers (if you didn’t give them money/power and reverse it), and for 1,000’s of years, they’ve been completely wrong. Instead civilization generally got much better for far more people than it got worse for — unless they listened to the chicken little’s, and they tried to stop it, then it got worse for everyone. (Think Stalin’s USSR, Mao’s China, Pol Pot’s Cambodia, Kim Il Jun’s Korea, and so on). Thus, informed people realize the historical averages and successes and how much better our lives are than our Great-Grandparents (in almost every dimension). And other will prey upon the gullible's fears. Who knows? One of these days, they might be right? But chicken little is hoarse from screaming the same message (and being wrong) for the last 15,000 years or so.

NOTE: There are a few legitimate micro-economics examples. They’re just not representative of the bigger picture: macro-economics, and how much better things really are. So that’s the difference between micro-economists like Paul Krugman, who think little picture, and short term. And the macro-economists that can think about the entire system and the long term. Which is why the latter can overcome our primitive fear of the unknown or change, and not become cave dwelling luddites, or Keynesian spouting troglodytes.

So while the non-economists keep falling for the visible costs and ignoring the invisible gains (or vise versa), mostly because them cherry picking what matters to them (called Politics). We’re smarter than that, and will look at all the data and think like scientists (economists) — and look back at history at every one of the failed predictions of doom, that lead to greener pastures for all (most), because we moved demand for labor from lower skill, boring, repetitive (and low value) tasks, to higher skill/value/entertaining ones, and our economy has flourished under that creative destruction. Because most improvements in production, increases value to consumers, and there will always be more consumers than producers of any good.

"Economics is haunted by more fallacies than any other science known to man."

Mostly, it’s just the one fallacy today: seen benefits are more important than hidden costs/consequences. (When the truth is just the opposite).

I try to educate believers by taking their arguments to them next level and asking them if it still applies:

The point isn’t to reductio ad absurdum them, but to try to get them to see that they’re not winning (if they think bigger / about the macro effects). Scale doesn’t change anything. Paying more for less isn’t a win to society. Spinning your wheels destroying something of value, only to replace it, isn’t a win either. Now if you’re replacing it with something better, that might be different - but then it should be the consumers choice (not the regulators choice) — as the consumer is much better (historically) of making the right choices than the politicians are.

This article dives much deeper into Minimum wage:

NOTE: If Chicken little ever is right, it will be because progressives/government converting us from a free and thriving economy, to a more managed one (less efficient and less adaptable). The less quickly labor costs can adapt, the more regulations slowing people from creating jobs and competing on the global market, the more education is required for jobs that don’t actually need certifications, and so on, the slower we’ll adapt to all the changes, and the more we lose in each of those tacks into the wind. The same with regulatory, taxes, laws and other burdens on the economy (adaptation). The global market doesn’t care what your excuses are — it will just keep moving forward without you. So the world is getting more competitive and global. We’re no longer the freest economy (which helped us out tack the competition in the past). We have huge burdens (social programs, safety nets, debts, obligations) that help people, at the cost of burdening growth and adapting to a more competitive market. So it’s not rosy for us as a country, if we choose to become a stagnant dystopian bureaucracy, like Europe. But in the global sense, it will keep getting better for more people than it hurts. Just hope that you’re not one that is on the wrong side of Darwin’s teeter-totter.