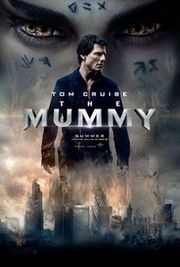 The Mummy got lousy ratings at 16/43 (Reviewers/Viewers) on Rotten Tomatoes. While I wouldn't exactly call it good, I'm not sure it stank quite that badly either. It sort of the opening salvo in Universal's, "The Dark Universe", which is basically Frankenstein (+Bride of), Wolfman, Dracula, Hunchback of Notre Dame, Creature from Black Lagoon. All the old horror film classics. This one tries to modernize the story, and use a big action name (Tom Cruise) as a douchebag (not a stretch). But there while it was horrible, there was a lot for snowflakes to get offended by.

The Mummy was a great feminist movie until the old white guy stole the young woman of color's power by mouth rape. Or maybe it was a retelling of the 2016 election where an ambitious political woman with extensive embalming would do anything for power but lost it at the last minute to a rich old white man whose youthful energy most certainly is powered by arcane evil. And so on. (I swear, I saw people complaining about stuff like that). People can get offended at anything.

But for me, it was just unnecessarily dark, serious, but with no purpose. The usual, ignorant opportunist douchebag (Tom Cruz) finds a mummy's tomb, opens the tomb looking for treasure, cranky hot archeologist hates him because of their one-nighter, and the Mummy uses it's powers of expensive special effects to kill people and try to make the magic mating that will destroy civilization. Thank goodness Tom Cruz redeems himself and saves us all.

It has absurd physics, unbelievable effects, crow hoards, undead armies, fortunately the archeologist love-interest belongs to a secret society dedicated to hunting supernatural threats, with the help of Dr. Jekyll, pools of mercury, and a lot of other shit that doesn't make sense, they're going to help prepare us for the sequel.

So it wasn't good. But if you go in with low expectations, it wasn't as bad as as the Reviewers will lead you to believe. And it sets you up to be prepared for future bad movies about the Swamp Thing, and other movies that I had little interest in, but slightly less after watching this one.