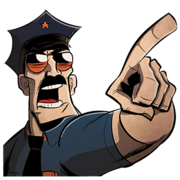 I had an “interesting” relationship with the cops around that time (or before).

On one hand he knew many and taught some of them martial arts, called them friends, and even had family members that were cops.

On the other hand, the LAPD motto during the 80's and 90's could have changed from “To Protect and Serve”, to “We’ll treat you like a King”. (Rodney King that is).

While the joke is slightly overstated, there were serious problems with cops in L.A., and elsewhere.

As a teenager with a hopped up car, the cops made me a target, and would get pulled over and harassed:

With California's 110% tax on traffic fines, that's a game of “bend over and grease up”.

So the city, state and police themselves had started driving a wedge between themselves and the community, and the “us versus them” attitude, only magnified the problem. As there became a stronger thin blue line, there became a lot more resentment by those on both sides of it.

Once at a Warehouse club, we got raided by cops in riot gear. It wasn’t enough to just disperse the crowd, they’d have a “real good time” with their show of force, and outright abuse. Including smashing a windshield with a baton, or being a bit loose with the clubs when people got too close. Complaints about that incident earned questions from the duty cop like, “what did he look like, or do we all look alike to you?” -- it was hard to tell, since he was in riot gear. So we're told "If you want to waste our time and file a report, be our guest".

I even overheard some cops joking about how they took our their frustrations on vagrants, “hey if you lay a phone book on them, you can smack them with the baton and it doesn’t leave a mark; but still hurts like hell. Ha ha!”.

On the other hand, they were cool if you were cool. And I saw them do great things, help people, stop bad guys -- and many take a ration of shit they didn't deserve and NOT react to it. I berated a cop for pulling me over (he was wrong), but he almost admitted it, and didn't show up when I fought it. And I got let off occasionally on warnings that could have been far worse for me. So you have to take the good with the bad.

The problem in 1991 was that blacks in L.A. had it all wrong, they thought it only happened to them. But the issues were with anyone that wasn't looked on favorably (youths and miscreants of all colors got rough treatment). But you can't reason with the determined ignorant -- and if you lived and worked in the black community (I had done both), you knew the community could be ignorant, racist, and very determined to stay that way.