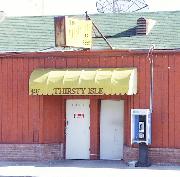 Burgers, beer and atmosphere: we used to occasionally do lunches at this place across the street from MacDonald Douglas and Rockwell, and not far from the Long Beach Airport, called "The Thirsty Isle". This story should also be captioned, "why I never drink during work hours".

This place was the Marianas-trench of dives. The lady behind the counter had a voice like gravel, smoked while she cooked (and only occasionally got ash in the food), and looked like she rode a Harley hard; as did much of the clientele. She also bellowed at customers that dared repeat or change their order. I did that once, and then quickly learned the error of my ways.

We swore she formed the hamburger patties with her armpits, and I don't want to think how the hotdogs were made. Both were pre-made, and precooked before we got there. She'd pull them out of a vat of water (or grease), and throw them on the grill for reheating and charring.

Double cooked and burnt burgers are damn good; and the beer was cheap. It warms my heart to know that the people assembling the aircraft for both companies would go there for lunch and a buzz. Whenever I flew in a DC-10 or MD-11, I think of the Thirsty Isle.

It was also amusing how tight the communities were. You have three or four different aerospace companies within driving distance, and they hang out at the same places, and exchange stories and information about job opportunities, and so on. It was a much tighter community than many realized.

We used to hire these summer interns and college kids to work for the summer, and then they all left when fall classes started.

One year, we were losing a group that we'd gotten particularly fond of. They were parting, it was time for a going away lunch (a very popular pastime), and I was finally legal. I was also going through my mid-life crisis early; I was 21, everything that was going to be legal was already legal, I'd been working for like 5 or 6 years, and the only thing left was to get married, have kids and die. We went to the thirsty isle for a send-off.

I'd never drank during work hours before, nor much since; but we were all drinking. I know I downed like 2 of the 48 ounce "schooners", and a couple of regular beers; after that, it's all a blur.

I believe there was singing and cavorting, and then we went back to work. I know because I remember little flashes. I remember actually coding some stuff, then waking up face down on my keyboard a few hours later; literally. I had key-cap impressions in my face, felt like I'd been run over by a truck, and my damn 'J' key wouldn't work because I'd drooled so much into the keyboard that I broke it. That's not humiliating; going to facilities and asking for a new keyboard because "someone" spilled something in yours.

I also had a splitting headache, my coworkers were making fun of me, because I looked like a wreck. I figured things couldn't get worse, when one of the bosses walked by, looked and me and laughed, and made snoring noises. If you're going to pass out drunk, don't do it in a high-traffic area. I guess I turned purple; but they took it fine - make fun of the young dumb kid.

After the second time something like that happened, I was much, MUCH more cautious about drinking at lunch. And I've had a secret empathy for others who've made the same mistake.