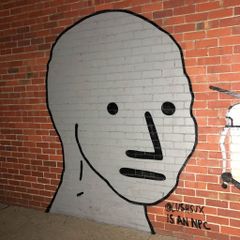 NPC is short for Non-Player Characters and is often exemplified by a very simply minimalist caricature of a human face... or many of them, since they tend to flock and repeat each other. In computer games non-player characters are pre-programmed and react in a very predictable and defense manner. They can't adapt to new information, they have the imagination of tape recorders that can only playback on demand: and are simplistic shadow's of real players (sentient humans) who can think for themselves.

In most MMORG's (Massive Multi-Player Games) you're trying to interact with other real players, and the NPC are more distractions or things in the way from your more important things. And NPC's in Social Media sites, or various forums are just distractions and are not contributing to adult or deeper conversations. (They won't answer pressing questions, and just regurgitate their sides talking points, or attack people instead of arguments).

SJW's (Social Justice Warriors) and calling everyone that doesn't agree with them a racist, sexist, homophone is a perfect example of a predictable NPC behavior. In geek speak they used to say, "I'll replace you with a very small shell script", meaning your views are so simple that could write their persona in a few lines of code. That's what an NPC means -- it's a new expression for an older expression, for a much older expression -- that all boil down to the left has no imagination, you either follow the herd or you're a heretic that must be destroyed for your apostasy.

The argument about NPC's sort of proves the point that they are acting like NPC's. In response to the Grey Face meme's, the far left and their media all had their "hate" reflex kick in -- where they label everything they don't like as hate speech[1], and everyone who says it as Nazi's or alt-right, proving they don't know what either of those words mean either. Then of course Twitter followed the barking commands of the media and far left, so banned the NPC image as hate speech, because it offended snowflakes. So ironically the backlash against NPC's, shows what the NPC movement is all about -- backlash against the mindless PC movement that follows each other like drones/robots, and the unwillingness to engage beyond the hate label.

While the NPC label is not at all constructive, it is very accurate. And how can you have constructive conversation with someone screaming racist at you over any utterance on your part? Those that omit context of why they are getting called NPC's find it very rude. But their reaction to it, proves that they are more NPC than human. If they could admit/own that there's a reason the NPC meme is popular, and somewhat valid, and no more dehumanizing that the reason they usually get called an NPC, then maybe we could grow as a society. But the left that hates the NPC label tends to fall into two camps -- (1) those who want to control the narrative and so won't accept any responsibility for their contribution to where the NPC label comes from (2) those that are so busy claiming that nothing their party does is wrong and everything the other party does is wrong, that they epitomize the caricature that they hate.

If you add one letter to Mob, it's NPC.