After warnings to the police (by her father), and police questioning her the day before the shooting, Nasim Aghdam became the 39-year-old YouTube Shooter. About 4% of mass shooters are female. The Police reported this as domestic incident, but it appears that she was angry about YouTube's willingness to attack people's lives (revenue streams) based on politics. That doesn't make her less a nut-job for shooting up the place... but it does go to show if you keep fucking with people, then you're trolling for crazies. 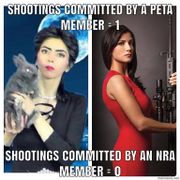 She appeared to do this because YouTube decided arbitrary censorship, which demonetized her video content: her decline in viewership and ad revenue is said to be the motivation behind the shooting. Weapon: 9mm handgun.

Police were given warning, multiple times, by the suspect's family [1]. The police questioned the suspect, but let her go the morning before the mass shooting... then police failed to warn YouTube.

Since she was a vegan/lefty, in the most gun-controlled state in the nation (California), there was plenty of warnings that the system failed to act on, and she didn't use an assault rifle, the media has dropped the story almost immediately. There's no value in politicizing a crazed Iranian chick, and the failure of the system to stop her, when they can't divert the story to something like assault weapons bans.

While most outlets all but ignored the story, only giving it passing coverage because it didn't fit the narratives, a few went the extra mile to spin it alt-left: