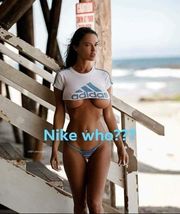 Nike decided to go all corporate slacktivism with a variety of efforts that don't seem to work out well for them. I certainly don't disagree with their right to hold a stupid opinion, but while we should all have free speech (and expression), we shouldn't have freedom from the consequences of those stupid opinions.

Nike supports National Socialism - Nike likes to position itself as a courageous sponsor of dissidents and the oppressed, like poor Black Millionaire Colin Kaepernick. However, Hong Kong is having major protests because Beijing wants Hong Kong to be more like the rest of China (oppressed)... and the people of Hong Kong want the rest of China to be more like Hong Kong (free). That and China wants to extradite all people who disagree to mainland for re-education.

Jun Takahashi, was a designer of a sneaker, who supported a more tolerant and democratic Hong Kong with the radical tweet, |No extradition. Go Hong Kong!" However, since China uses Social Media obedience scores (and corrupt courts and cops) to bully its people into conformity, they encouraged a Social Media backlash against the shoe (because of the designer). Nike had a choice of standing up for the little guy and freedom, or siding with the corrupt, organ-harvesting, mass-murdering national socialists who run real concentration (re-education) camps (mainland China). Nike sided with the authoritarians over liberty, again. Just like with Colin Kaepernick: the irrational and incorrect mob rules. Nike KneelToo - Nike decided to get involved in Colin Kaepernick's #KneelToo movement, with posters supporting him and "Just Do it" advertising (talking about his sacrifice for a good cause).

It doesn't help that it wasn't a good cause (BLM is based on the ignorance of it's followers), and that this wasn't a good method of protest. It missed that few cared if Kaep protested on his own time, or off screen, the problem with was by forcing fans to pay to watch an idiot insult them over things he didn't understand. It was a silly meme, as Kaep didn't sacrifice anything, and the cause was flawed at it's premise. That got them some PR attention ($24M in buzz)... then it got them a lot more in mocking animus/backlash (nearly $4B in stock valuation). So the investors didn't like it in the short term. Iran's Ahmadinejad supports Kaep (and anything anti-American), by hinting at what a racist country America is, because one of our top quarterbacks not having a contract. (He seems to agree with Democrats, BLM, and Nike). Of course, everything about that is wrong -- Kaepernick had the worst record for 2 years before he became a pain-in-the-ass and was dropped. In Iran he would have been tortured or killed for questioning the regime. And if he was really good, he probably would have been fine. To the Social Justice Warriors, too much is never enough. And on queue, and few SJW's came out complaining that Nike has no credibility to hijack Kaep's message. [1] So the question isn't whether this hurts brand perception in general (some evidence it has), but whether it hurts or helps them with the their customer base? Since their customers are less educated, more racist and more anti-American than the average (they're hot in inner cities and abroad, among low achieving minorities), it might work out in their favor, even if their brand is coupled to ignorant opportunism for everyone else. I mean does anyone really believe they care about social justice, or that they're just using it to sell shoes? Betsy Ross Shoes -

Nike made some Patriotic Americana Shoes, with the Betsy Ross flag. Colin Kaepernick whined to them that since the flag came from the era of slavery it hurt his black-half's feelings as it was a symbol of the White Patriarchy (or White Supremacy), which explains why Obama flew it at his 2012 inauguration. Nike took the Anti-American position (again), and pulled the shoes. Kaepernick had previously said he was protesting police brutality, not the Flag itself... but this proved otherwise: it's symbols of America that he (and Nike by proxy) hate. Arizona and New Mexico pulled tax incentives for Nike manufacturing in their state, while the Governor of the People's Republic of California, Gavin Newsom (D), and other Democrats, jumped in, and said they thought Nike was being American by being anti-Flag. Trump Jr. jumped in by retweeting a shoe more likely to fit where their loyalties lie (a soviet style shoe).

Context: Colin protested the Betsy Ross flag because there was slavery. Betsy Ross was a Quaker. Quakers were ardent abolitionists who opposed slavery and helped with the Underground Railroad. She ran her own small business and never had slaves. She is being lambasted by Nike and Colin Kaepernick who both profiteer from a near-slave labor force of 85% female Vietnamese who are paid about $1.00 per hour for their 48 hour work week. This leaves the question, are they ignorant or hypocritical virtue signaling elitists?

I'm somewhat curious what Nike will do next to virtue signal and shoot themselves in the foot. I guess they're trying to prove the adage, "sometimes your purpose in life, is to serve as a warning for others". I'm hoping that's the case. Because they if they succeed by being divisive and chasing the feelings the young, gullible, disenfranchised... then others will follow, and the nation will become more bitter and divided.