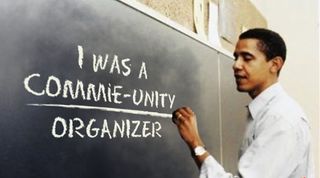 2016 is bringing a lot of stories that may seem unrelated, but overlap tremendously. We have: (a) Obama's Gun Control Executive Orders (b) Oregon Bundy Insurrection (c) Mass Shootings. What do they have in common? A failure of leadership, cause and effect, symbolism over substance, and so on. The point is actions cause reactions -- the lash causes backlash.

We know that drawing media attention to issues gets a counter-reaction. It happens consistently:

How do we know? It's been shown in psychological studies, many times. But more important than lab theories and poll results, is real world results.

If you're naive enough to correlate gun sales with gun violence (and miss the fact that violence and gun crime in general has been trending down for decades), then you should be yelling at the President to shut the fuck up. So we should all be able to agree on that at least: if you're a hole, stop digging. If the restrictions he's putting place were to matter (and I can go into details on the how these proposals will not make a measurable difference) -- but if you believe they mattered, then he should be doing them quietly. A silent policy recommendation that might matter and might not inflate sales. Instead of the opposite: big wind = little results, with major backlash on everything it stands for. (All hat and no cattle).

If you doubt the last point, look at Mass shootings by administration. There have been 23 real mass shootings since Obama was elected to sensationalizing guns/gun control, and making a big deal of each one of them. (Many more than prior administrations). Some cook the numbers to make it look sound like even more. But using any objective metric, they go up as they are sensationalized, and they are sensationalized when the left is in power (and thinks it has a chance of using the mass shooting canard as an excuse to take away everyone's guns).

The fact that the media is ghoulishly willing to sensationalize bloodshed for ratings is not a big surprise. But knowing that the more attention you bring to it, the more you encourage the next one, what does that say about our politicians and media? Do you really think they care about the issue of saving lives? Or they just use the limelight for ratings/voter boosts? If they cared about the former, they'd shut up and work quietly. The latter, they'd bang drums and ring klaxons, like they've been doing.

Each time Obama gets on camera, and claims "this has got to stop", it is said with a wink and a nod to the next shooter. Please kill some more innocents so the President can get more camera face-time, and Pelosi can say something stupid in her best imitation of the wicked witch of the west. If they fixed the problem, they wouldn't get the ratings, and all the posing and posturing. These events give Obama (ever the community organizer) a selfie stick to prove he cares, by getting more people killed.

You have a choice. Either care about the guns and lives lost, and shut-up and let things cool down. Or you can care about your own self-aggrandizement and the aggrandizement of your views -- but not both. We know which Obama chose.

I disagree with the President and gun-controllers premise, that guns cause problems. To the informed, it is strictly about WHO gets the guns (good guys or bad guys) that will impact the outcome. Bad tools in good hands are used for good, good tools in bad hands will be used for bad. So if we cared, we'd focus on the right problems.

Even in the land of make-beleive (where who has guns makes no difference, and it's purely a volume problem), then to make a difference: Gag the President. Stop sensationalizing every gun and gun control agenda, because you're smart enough to know that it will only increase gun sales and make things worse (for everyone but the politician speaking).

We should deal with issues when they aren't obnoxious protest and stupid symbolism like camping out in a park to smoke pot and rape women (Occupy Movements greatest hits), or having a gun-club meeting / press-event in an abandoned government cabin (Bundy "Terrorists"). Once they've raised stupid to that level, I think we should treat them with the equal respect/contempt. And save our real contempt for any Politician/Media outlets that try to sensationalize the issues (and encourage more of it) for ratings.