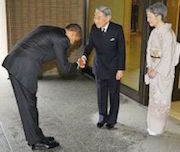 Obama was warned by State, not to belittle the office by bowing to foreign sovereigns. So he ignored that.

Did he learn? No.

He went on to bow 6 more times to other leaders [3], proving, he's incapable of growth.

Is this a huge deal? Probably not. Our allies can get over it, and other than being mocked for being ugly Americans farting at the dinner table, this isn't likely to have huge ramifications. But the Press had a field day when GWB once squeezed the neck of a friend (Angela Merkel) at a dinner, as over-the-rop tacky (and it was front page news and lead many reports), and Obama's gaff was orders of magnitude worse than that... and not a one-off event. They attack Trump or Reagan for far less. So the point isn't that I think Obama irreparably harmed the U.S. by showing how culturally ignorant he is, to me it's about the double-standard or deniers that pretend Obama was smooth and couth because their partisan media outlets glossed over the rough edges for them.