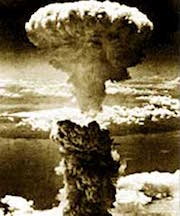 Wikileaks revealed [1] Obama ignored the advice of Japan's Foreign Minister Mitoji Yabunaka, who told U.S. Ambassador John Roos, "the idea of President Obama visiting Hiroshima to apologize for the atomic bombing during World War II should be a 'nonstarter.'", and that "it would undermine the defensive alliance between Japan and the U.S."

Obama ignored their advice and went to speak at Hiroshima, [2] on what everyone knew would be seen as an apology for ending WWII as quickly as possible -- and actually did more to open up old wounds than to close them. It polarized the historically informed against the "America was always wrong" crowd (Obama's base). And this showed the international manners of cleaning his toenails with a fork at a fine eating establishment.

Some water carriers claim, "it wasn't an actual apology", but as Charles Krauthammer points out, [3] if you want to talk about war in the abstract, you do it in Prague or Switzerland or somewhere else than Hiroshima. When you do it in Hiroshima, the world is going to associate it with WWII and the bombing: which is why Japan requested that he NOT do it there. So it was going to be seen as an apology, the only debate is whether that was Obama's intent or his incompetence.

Not only did Obama force the Japanese, and Americans, to suffer through him embarrassing himself, lecturing us on something he forgot to fact check. After being warned to not apologize (especially on memorial day, in a foreign country), he did what he often does, tried to give us his alternative reality version of history: which is an insult to all who know better.

Really? That was why Hiroshima happened, because of our instinct for domination and conquest?

If he meant what he said, then that's truly embarrassing. But diplomatically, the alternative is worse. He might have meant it as Germany and Japan caused this. If so, he was insulting Japan on the site of a sacred memorial for them, and that's in even poorer taste. Either way, it was so poorly worded, that it was an embarrassment to him to have make that speech. He would have been better knowing when to shut up. (Japan later came to the U.S.S. Arizona to try to mitigate the diplomatic SNAFU Obama had done, by apologizing back, otherwise the loss of face to America, could have had long term negative impacts to Japanese perceptions).

I'm giving Obama the benefit of the doubt, by assuming he didn't go to Hiroshima to insult the Japanese on the site of a sacred memorial, and thus assuming he only meant it as an apology (and thus was seen by many as an attack against America, and all those who died or served in WWII). Which implies that Obama's in the Oliver Stone camp, and thinks the bombing was unneeded and it was an apology.

If you want to read more on that topic, read: