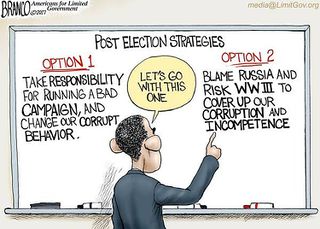 Hillary using a private email security in violation of the law (and that was likely hacked according to the FBI), wasn’t a problem for the media/Obama (despite secret, top secret and super-duper top-secret stuff being on there): nothing on it mattered. But her underlings, Podesta gets hacked and releases truths about the Democrat campaign (and how they were corrupting an election) and not anything vaguely related to national security, and that's a threat to national security? Are they that stupid, or that partisan? Do they get the irony/hypocrisy in the position?

Remember the Obama administration and government hadn’t even bothered to define what is an official cyber attack, but they were sure the Russians had done it. And thus we could commit acts of pre-war like throwing out diplomats, and the media wasn't calling him on it?

Here's a few other hacks and events that got no response from Obama:

None of those were worthy of official response from the Obama administration. But scant evidence that the Russians may have helped get the truth out about criminal and immoral acts done by the Hillary campaign: that put the Obama admin on a war footing.

The strongest foreign policy signal he sent to the world was: never, ever, tell the truth about Democrat corruption and abuse of power.