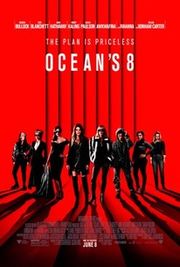 I was never a fan of the Ocean's series, partly because I'm not a caper-heist movie fan (too much artificial complexity), and most ensemble films substitute star power for good writing, acting and plot. Plus, it had George Clooney, Matt Damon, Brad Pitt, the trifecta of clueless-but-sanctimonious douchebaggery. So the Ghostbuster's Girl-Power remake of THAT wasn't high on my priority list for films I gotta see. But my wife wanted to see it, and she sees enough of my stupid movies that a little quid pro quo was in order.

Maybe it was my lowered expectations, but I really liked it. It was far better than the others, though that's a low bar. It was one of the better heist movies I've seen, probably because it didn't go over the top with an elaborate 400-stage, everything has to go perfect, sorta bullshit complexity that is crammed into most. There were whiffs of that, to keep the heist-plot pages filled and continue the genre... but a lot was leading up to the theft, or afterwards, and that played better for me. And while it had some plot holes with over-complexifying a snatch a grab, the holes weren't as in-your-face as in the average episode of The Walking Dead. So I liked it better than some other recent films I'd seen, such as Avengers: Infinity War. It was mostly just a heist film, with a few twists -- where criminals are the heroes, and James Corden plays himself as carpool insurance investigator. There were a few subtle undertones of Girl Power, without beating you over the head with it. While it's not deep, it was an afternoon of escapism.

With a 68/50 Rotten Tomatoes rating, it wasn't exactly screaming "you gotta see this" -- but for once I went more with the reviewers than the audience. Their rating is about how many that liked it, not how much -- but I still would have given it a solid 7 out of 10 stars. Completely watchable, lots of star power, lots of clichés, and only one or two lines that were a little, "Girls Rule: Boys Drool" with the reverse-sexism. So it wasn't a beat-you-over-the-head with feminism sort of tripe that comes out of Hollywood gender-bending remakes.

In fact, it wasn't really a remake at all. I went in thinking it was a prequel to Ocean's 11 (or 12, 13), because 8 is less than 11. But there were references to 2018, and cues that let you know this is after the other movies. The acting was believable... with Anne Hathaway and Helena Bonham Carter providing the most interesting characters. Helena playing Rose Weil, a ditzy, over-her-peak, fashion designer, might have beat a few cliché's into the ground, but I liked her.

So while it's not the kind of film you must see in a movie theater (it would be fine on an airplane or Netflix), and you're not going to leave with any deep epiphanies or claims that it deserves an Academy recognition -- it was highly watchable, I certainly got a few chuckles, and felt it was worth the time.