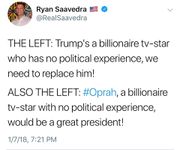 Democrats under Pelosi/Reid/Obama was so far left and hyper-partisan, that they lost Congress, the Senate, and most state governments. Still they kept moving left, and getting more and more shrill. Then they realized that they had no depth left: they'd purged all moderates, fiscally competent, and anyone but hyper-shrill coastal progressive attention whores. But no one that they could rally around to win a NATIONAL election. Then Oprah-for-president kicked in, and they all flipped 180° from hating rich republican celebrities, to OMG that would be great, run Oprah run!