Origins of the Internet 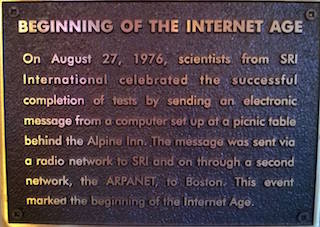 One of the dumnest things I semi-regularly hear otherwise intelligent people say is, "Government/ARPA research gave us the Internet”. Government gave us the Internet in the same way they invented (gave us) the car or airplane. They came late to the party, contributed a bit to R&D, but if they’d done nothing, we’d have had them anyways (and arguably better). Almost every major innovation came from the private sector first. Most of the time, people would rather be wrong than corrected... and it's a difficult an issue to explain, so I just sigh and walk away. But this isn't one of those times.

TL;DR version: by 1976 we had hundreds of computers networked before ARPA was thought up. Concepts like cyberspace, hyperlinking, virus’s and worms all predated 1983 when TCP IPv4 got finalized (the protocol that’s behind the internet got its flag day). By 1993 the Internet carried only 1% of the information flowing through two-way telecommunication, the gross majority of it was users that were still on networks (millions of users), just not using the TCP/IP protocol. By 2007 that had flipped and most traffic was TCP/IP based, but that just meant people had standardized on a lowest-common denominator protocol, not because it was better, but because it was “good enough” and no one owned it. (It was neutral). Without it, one of the other protocols would have become a standard and we’d still have had everything we have today, and arguably more (since each of the others had distinct competitive advantages over TCP/IP. So the government gave us nothing that we didn’t already have, or wouldn’t have. Politicians normally jump in and take credit for other people’s work, but you have to be a rube to buy it.

Networks like telephones, fire/smoke signals, semiphore flags, radio and morse code, and the other ways of communicating over distances, long predates computers. So networks are older than computers are. And Computers have been "networking" from their very invention in the 1940's. Terminals talked to the computer over a network. Keyboards, screens and cards inside computers are just little networks to talk to the processor.

Throughout the 1960's, 1970's, and 1980's, there were a ton of private networks. Commercial airline reservation system (SABRE) started connecteing mainframes in 1960. IBM had their SNA protocol since 1974, and was interconnecting far bigger networks than anyone else, Digitial Equipement had DECnet in 1975 connecting their PDP11's, and so on. The government started FOLLOWING the industry, and was trying to catch up on networking as well. They created ARPA and ARPANET to connect some of their comptuers, just like the private sector was.

The simpler designs like ARPA's NCP and others used control programs to talk one-device to another, during a time where more sophisticated networks like DECnet and SNA used packeted protocols and more sophisticated routers, bridges and tunnels. While private networks had this sophisticated routing in the 1970's, ARPA didn't finally get this standardized until 1983 when TCP/IP's flag day happened.

Some think of the Internet as the TCP/IP protocol. But by the time TCP/IP had been created in 1983, the following things were happening in the world:

By the time TCP/IP was invented, networks were evolving to get bigger and interconnecting. Everyone knew that eventually they'd become one big "mesh" or "web" (with or without government research). Science fiction writers like Gibson coined "cyberspace" in 1981. Brunner talked about virus's and worms in 1975. And Asimov and Orson Scott Card were talking about hyperlinking before there was a World Wide Web. (Hypertext, SGML, Hypercard all predates HTML/www by a 5-10 years). So the government was 5-10 years BEHIND everyone else.

So what was the Internet?

The government through ARPA sponsored some univesity projects in the 1970's to connect up some research computers. They were copying what the private sector was doing. So there were two parallel sets of networks being developed: education/government and business. And far, far more users were on the ironically named "private networks". It's ironic, since more of the public used them, and they were more open (you didn't have to be in school or work for the government to have access).

By 1983 and the TCP IPv4 spec got rolled out, a decade behind the private sector. But even then the Internet didn't exactly take off. For 10 more years more people were connecting to each other using BBS, and private networks like Genie, AppleLink, AOL, and private companies like TRW's Telenet had their own super-BBS that could talk to each other (and those few research computers on "the internet"). They all started connecting (bridging) into a super network. They each had more features, users and were easier to use.

The private sector brought us most of the innovations like: Email, forums, chat, and so on. In fact, even in the 80's those were often much better that they are today. There was money for creating these things and making people more productive -- so the profit motive drove better and more powerful interfaces and so on. Eventually these would filter back to the Internet variant, which would get implemented in more technically simplistic (and harder to use) ways.

In the 1993 the Internet carried only 1% of the information flowing through two-way telecommunication, the gross majority of it was users that were still on networks, just not using the TCP/IP protocol. But by 2007 more than 97% of all telecommunicated information was carried over the Internet. So the "internet" eventually won the protocol war, but was not responsible for 99% of the innovations up to that point.

Finally, in the 1990's things started to change. More and more of these different private networks were talking to each other. They could through bridges and gateways, but they had different features and abilities that wouldn't cross those bridges well.

Because government and universities had a mix of all the hardware and private networks, they had created a lowest common denominator set of protocols that generally could work with everything. TCP/IP took off, not because it was good, or better, but it was good enough. It was the lowest common denominator that worked with everything else. Since it did the least, it was the best choice for everyone to adopt.

When TCP/IP took off, things sort of flipped. Instead of connecting to you network, and bridging to the Internet to get to others not on YOUR network, you started using an ISP to get to the Internet, and then use that to get to your work or social networks. And over time the lines blurred, until it was really one but mesh (Internet).

During this "internet-ization" of networks, we lost a ton. All the private stuff had to drop features and functions that didn't work well with the Internet (and other computers)-- and we had an era in the 1990's where everything moved backwards technically, but got more ubuiqitous.

email lost things like email reciepts (seeing when people got your email) or un-send, and so on -- but your company email and home email now worked to everyone easier. You lost the ability to have push button configuration (eventually DHCP brought a half-assed rip-ff of that back). Chatting, file sharing, and so on, all got worse in features, but better in scope and reach. Your social forums like AOL, AppleLink, eWorld, GEnie, became universal with everyone being able to join in. But while private networks tended to know who you were (for real), the Internet added so many people and anonymity, that rudeness and noise drowned out useful information. So the tone and quality changed a lot, for the worse.

WWW is the Internet?

One of the things that helped this with the migrations was HTTP, WebPages, or, the "world wide web".

In the 1960's, IBM took an older concept of creating a standard markup language (lexicon) to share large documents among their large customers. Their researchers (Goldfarb, Mosher and Lorie), created their "Generalized Markup Language" (GML) -- whose acronym happened to match their initials. Then in 1980's they made into an ISO standards, and it became "Standard Generalized Markup Language" known as SGML. Apple's Hertzfield took the inspiration and created "HyperCard" (with HyperLinks) in 1985, and Microsoft liked the idea so much. they took it and inspired VisualBasic.

In 1989, A researcher at CERN (Tim Bernes Lee), needed a way for researchers to share documents, and he created a dumbed down version of SGML (so easy that not very computer literate researchers and assistants could use it), and that became HTML. (HyperText Markup Language). It wasn't good, but it was good enough, and it spread so fast in the vacuum of being the only choice, that it was crazy. It happened to be the easiest way to publish and share information (poorly) right as the industry started shifting from private networks to the Internet. So viola. A horrible implementation became a standard. And eventually enough got added back in, that it became a better experience again.

An the important thing to realize here is that government didn't really invent much or create much. If ARPA hadn't have wasted billions on research, you still would have connected computers together (as was happening without them).

The TCP/IP protocol wasn't magic, or even that great. It was a bit more robust in some ways, but inferior in others. For example other protocols had more security, features, faster, or had ways of guaranteeing bandwidth (performance), so some channels could take priority over others. And things like that. But IP was there, free, it was lowest common denominator (so easy to implement), and it was easier for multiple competing companies to agree on the neutral parties standard than to fight it out -- so they did. But there's absolutely no reason to think we wouldn't have done the same things without the governments funding/money. Most common protocols have happened without the government spending billions on them.

HTML wasn't a revolution enabled by ARPA, it was an evolution of a private companies research that was simplified and delivered on whatever infrastructure was available, by a guy at a government facility. Without his variant catching on, one of the dozens of others would have.

There were some conceptual breakthru's in universities, and tons of wasted effort. But even the ideas that were started in universities were borrowed by the private sector, quickly adapted and turned from grad project to solutions people wanted to use (with lots of advances). And many of thier innovations leaked back and were later copied by Universities for the "Internet". When you look at total money or total users, the private sector spent more, made more, and brought many more into the networking era than the public sector ever did, by orders of magnitude.

Ask a specific question of people around back then (using both sides): what breakthroughs did ARPA empower, that wouldn't have happened without them (or happened quicker because of them). Most people well versed on the technology of the time, will scratch their heads a while on that. (The only one I can think of has to do with the slopiness and fault tolerance of TCP/IP, but even that is debatable). At best it was parallel development. And it's also important to realize that ARPA got it's money from where? Oh yea, taxes, which came from where? The private sector. It was our thriving private sector economy that enabled the taxes to go to University research, it was that discretionary income it empowered that enabled people to buy personal computers, it drove all these private networks and users into the fold -- and that created the Internet -- not a washington bureaucrat like Al Gore.