In the mid 50’s M King Hubbert plotted out oil production, and said we would peak in the U.S. between 1965 and 1970, and in the world by 1986, so we needed to give government control to save us. Globally, advances in discovery, has resulted in at least 2050 until we expect to supply peak, 70 years or so after we were supposed to be doomed -- assuming no further advancements are made. And demand peak (for oil based energy) may already be on the decline, well before we ever consumed all the supply.

Hubbert was celebrated by the naive when oil production seemed to slow down in the U.S. in the 70’s. Woo hoo, the ruination of humanity is upon us! That'll teach those wasteful louts not to listen to the watermelons. But they failed to recognize that was that the only reason the U.S. production went down was because it was cheaper to get elsewhere (so we preferred to tap their cheaper capacity first).

Since then, Fracking and tar sand extraction has brought the U.S. to a new high in production -- and we may hit peak supply in 2050 (70 years later than they predicted), and by then alternatives are becoming available and demand is declining.

The problem for the Tragedy of the commons scare-mongers is that as the costs for one kind of energy goes up, it makes all the alternatives and improving efficiency more attractive to offset any difference, thus the markets correct themselves much better than the planners can plan for. 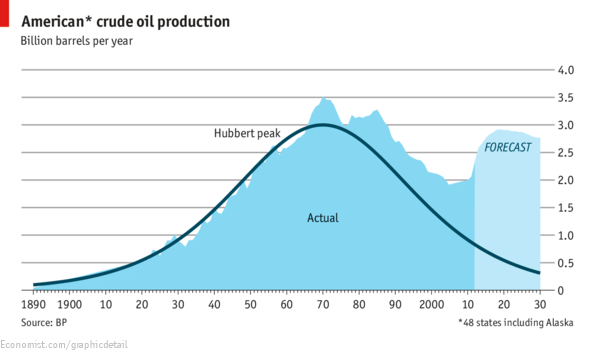