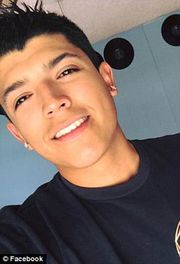 Some jackass on the Internet wanted to seek fame and attention, through a stupid stunt that violated all common sense and gun safety -- so he convinced his pregnant Girlfriend to shoot him, because he had an encyclopedia to absorb the energy. And the nitwit had her do it with one of the most powerful handgun cartridges in existence. The bullet went through the book, the girl took a plea bargain for negligent manslaughter, and Pedro died and the average IQ of humanity went up by some marginal amount. I realize that sounds callous, but sometimes your purpose in life is to serve as a warning to others: and Pedro served his purpose. And the world lost another Democrat. Condolences to friends and family that lost a friend or family member to abject stupidity. I hope his death serves as a warning to others and saves lives: hence a willingness to mock, instead of feeding the Munchausen by Proxy beast. Don't be like that guy!