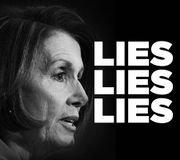 Nancy Pelosi (D) California Congresswoman - When asked about gun rights, Nancy explained, "We're talking about no further sales of assault weapons... no further sales of... 30 rounds in a gun. We're re talking about background checks which is very popular, even among gun owners, and, hunters. We avow the First Amendment." Nobody can pack a paragraph with stupid like Nazi-Nancy. Let's break that down error by offensive error.

This is one of 100's of examples I could give of her gun-stupidity (or larger stupidity). In the end, those that listen to Pelosi get dumber or more dishonest by proximity.