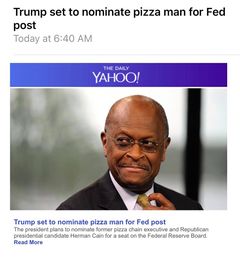 There's a few examples of the media referring to Herman Cain as "Pizza Man". He got an MS in Computer Science, worked at Pillsbury, managing 400 Burger King's, where he did so well they promoted him to CEO of a restaurant chain (Godfather's Pizza: 1986-1996). He was also chairman of the Federal Reserve Bank of Kansas City: 1989-1991 and 1995-1996, with Deputy Chair from 1992-1994. After that he was CEO of the National Restaurant Association (1996-1999). He was on the board of directors for: Aquila, Nabisco, Whirlpool, Reader's Digest, and AGCO. He won the Horatio Alger Award, and got honorary degrees from Creighton, Johnson & Wales, Morehouse, U of Nebraska, NYC College of Technology, Purdue, Suffolk, and Tougaloo. But sure, “Pizza Man” sounds like a credible unbiased News summary of his accomplishments.