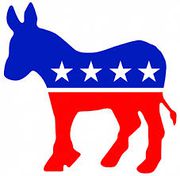 I have no problems with Democrats who complain about the rude right polemics (Sean Hannity, Rush Limbaugh, Milo Yiannopoulos). What I have a problem with is hypocrisy by those who ignore that those are commentators and not the political leadership, and that their side has many more who are leaders of their party. And their media, commentators and celebrities in even greater quantities and lower quality (louder / more abbrasive). Not to mention whole hate organizations and institutions that exist solely to misrepresent the other side and create agitprop. They can't even fathom that Donald Trump is just backlash against their behavior, and is only tolerated because he's using the same techniques the left has used for decades: and they hate it. Without any introspection of how it could happen, or why they should behave better to shame him, not worse to justify his behavior. As long as they have characters like this on their side, they don't get to claim the moral high ground on anything. You get the democracy you deserve (or demand), and the Democrats have tolerate these folks as the voices of their leadership for way, way too long.