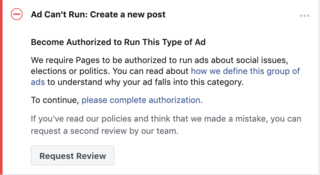 Facebook enacted a new policy, "We require Pages to be authorized to run ads about social issues, elections or politics."... and to become authorized you need to list the name/identity of the person(s) paying for the ad. (Not the voracity or quality of the article/post, just the identity of the poster). They of course have no such requirements for anything else, or I suspect if the political leaning of the ad is left wing enough. To the superficial thinkers, that sounds reasonable, "just trying to prevent trolling from foreign governments". While thinkers realize that foreign agents have resources to create fake identities and credit cards: so the only people it is really blocking are domestic folks that want to remain anonymous. And who would do that and why? Because the left has a rich history of violent threats and actions. I speak as someone that has had death threats mailed to my house. The latest leftist fad of doxxing and harassing anyone on the right is well known. From getting CEO's fired for having unpopular conservative views, to various other vandalism and assaults (like spitting or Andy Ngo Assault). The right knows to not put their families at risk by having their name on a leftist hit list, like FB's ads. Whereas the last major political assault on a lefty for being an ignorant progressive was when JFK when he was shot... by a further lefty for not being left enough.

The page (article) I was going to promote was the following: