Q: What about Helsinki? 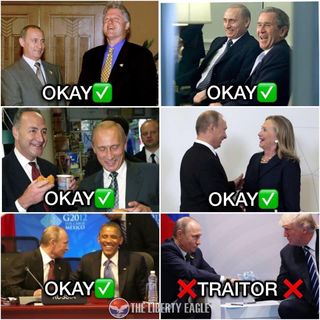 A: This proves media bias, more than Trump bias. Look, every President meets with the Russia. Virtually all Politicians say nice things about powerful leaders, and try to butter them up, and get some things from them, so they can play great statesman. Trump is no different than all of his predecessors in this regard, if anything, he sucked up LESS. Part of it is truth, part of it is that in order to persuade the other side, they have to make them feel at ease. Remember basic history:

If you aren't reminded of this, every time they're talking about Trump and Putin, that's because the media is intentionally trying to miseducate you, and convert Trump into something nefarious, for the most benign of behaviors. He did nothing unusually fawning or apologetic, and has been harder on Russia than Obama Admin ever was.