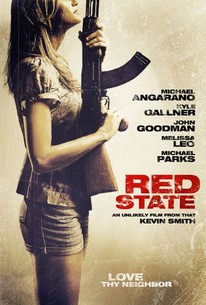 Wife rented Redstate because it was a Kevin Smith movie and she thought it might be funny. Wow. Not funny. Not good drama. Just depressing homophobic religious serial-killers get taken out by the even worse government.

Only about one movie a year (or less) gets my stinker award: this earned one.

If delusional far-left dogma by a Hollywood sellout, who hates conservatives and all the redstates are fly-over country, and you want watch bad dialog with a worse plot in a hollywood hate-film, then you'll probably love this. But I felt ripped off and I only paid $.99 at redbox for this dog.