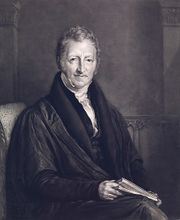 In 1798, this guy named Robert Malthus wrote An Essay on the Principle of Population , basically saying that since population growth was exceeding food production, our labor value would crash to zero, we’d all be poor and we were all going to die in 50 or 100 years (known as the Malthusian Catastrophe), if we didn’t give the government control over our breeding. Also we needed to “condemn the bad specimens to celibacy”. Hey, he must be right, he used math.

We ignored Malthus, and he was wrong about everything. The world not only didn’t go into meltdown by 1898 (or ever couple generations after that): it got better in every dimension along with population growth. But his ideas long outlived the era where they were proven wrong, and were often repeated by the the left like Keynes, or to this day.

Every time one the collectivist ideas fail (which is always), they try to repackage it (reinvent it), to sell the next gullible on the same bullshit. And this zombie has more lives than a cattery. But all the variants have a few things in common, their premise (humans can't control themselves and need government), their proposed solution (giving up our liberty/money to government to fix it), the outcome if we didn’t act (our near term violent demise, to add immediacy), and then finally — the unwillingness of the rational to heed their warnings, and then the complete lack of consequences that were predicted (proving that they were wrong all along).