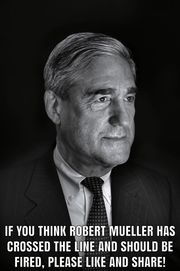 Robert Mueller is leading the witch hunt into non-existen Trump Russian collusion. He and others have implied as much... but Mueller will be seen as a failure if his investigation doesn't find anything, so they've been picking off people around Trump for things completely unrelated to his charter (Russian Collusion or Obstruction of Justice with regards to Russian Collusion).

This section needs to be completed. For now, it is a placeholder for a lot of things to come. So far, I'm not impressed of who was on the team, anything they've found, what has leaked, and so on. But I'll wait for the final report before judging Mueller (or Trump) based on the evidence presented.

Special Council Robert Mueller found evidence of Trump's lawyer (Michael Cohen's) wrongdoing completely unrelated to his investigation into Russian election meddling, collusion or obstruction. But if you pull at enough threads, some are likely to unravel -- so he handed off that evidence to proper authorities, who obtained search warrants and conducted the raids at Cohen's home, office, and hotel room. (Systematically attacking anyone close to Trump seems to be the Democrats Schtick).

Since Mueller can't find evidence of his charter (Russian Collusion or Obstruction of Justice), he needs to justify his existence, so it doesn't appear to be a failure. Which is why anyone close to the President who is guilty of littering or jaywalking is getting charged by Mueller or his SS.

For a special investigation to work, and have any teeth, they need to be above reproach. Mueller is the antithesis of a competent, non-partisan, focused investigation into Russian collusion. He's an Obama era crony, desperate to find something to distract from the fact that his very reason for existence, was a fake paid-for dossier created as opposition disinformation, invented by the Clinton Campaign. How do you ever take that back and inject credibility into the Mueller investigation?

If you read Andrew McCarthy columns, he seems to believe that most of what Mueller is doing at this point is attempting to protect the FBI and the DOJ and desperately trying to find some "there" there, so their actions toward Trump were not them getting played as pawns by the DNC. Good luck with that.

Sadly for all of us, Mueller's fishing expeditions, off charter persecutions, and embarrassing revelations about violation of process and utter buffoonery (at DOJ, Obama Administration, FBI and the media)... all this has proven is that this was the deep state collaborating with the Clinton campaign to undermine our electoral process. Thus I suspect this will go down as a sham wrapped in a fraud, bungled by incompetent partisan Democrats.

It is going to be hard to un-rape lady justice and wipe her memory of this affair, even after she's gone home and had a long hot shower.