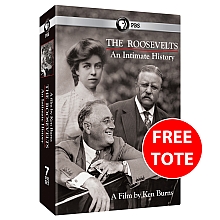 Yeah, I watched the Roosevelt Documentary, written, directed and shown by the left, for the far left. It wasn't bad at all for a propaganda series: choosing to show only the good done by progressive policies, ignoring all the consequences, and doing it's best to eliminate any balance about these guys. Being that I read (and have written) a bit on FDR, I was quite disappointed by Ken Burns airbrushing or any of the rougher edges, which frankly (pun intended), would have been a lot more interesting.

Teddy, since he was a Republican was a warmongering and "bloodthirsty" guy. (One minor mention of his Nobel peace prize, without going into why, or any comparison towards his contemporaries). He was only going good when attacking businesses. (None of the consequences were worthy of mentioning). FDR's policies had very little consequences that were bad -- oh, like extending the depression by a decade, and completely forgetting to point out all the corruption by him that would make a Blagojevich blush and resign in embarrassment.

So it was a good piece of half-history. If the goal is to dumb down americans and make them feel good about progressive liberalism, no matter the consequences/costs, and write a fawning puff piece the left would never tolerate of Jefferson, Reagan, or Nixon, then so be it. Sadly, most haven't read enough history to realize how duped they will be by PBS, so they will continue to praise Burns/PBS and think they're getting the whole truth, when fictitious characters on Mad Men would have had the personal integrity to feel shame at such spin.