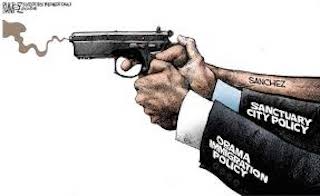 What it really means is that local cities will thwart federal law, and release fugitives into the public rather than risk repeat-felons being imprisoned or deported for federal crimes (if illegal immigration has anything to do with it). So, if an illegal alien is arrested for another crime, and they’re fingerprinted or information is shared with the federal government in any way (which is common practice) and the federal government or ICE finds out that person is an illegal alien, AND has committed other crimes that they’re wanted for, ICE/Fed agents normally send a request to hold that person for 48 hours so they can come pick that person up. Sanctuary cities will ignore federal law, and release that person, and often delete information (obstruct justice), rather than share info/detainees with the fed/ICE. That’s what a sanctuary city means.

The Myth of the White Pedophile - When it comes to kids (including little girls), modern American white male is the least rapey on earth. Latino's and some other minorities? Yeah, not so much. Facts are facts, when you come from a sexist culture that doesn't value lives, especially of females and children, very highly... (whether middle eastern, African, or Central/South American), then you're more likely to perpetrate crimes on those females and/or children. 2019.05.09 Raping dog to death - What does Sanctuary City/State laws mean? It means a guy that rapes his fiancee’s dog to death is set free, rather than letting ICE deport him. 2019.02.17 Illegal shoots at cop - Napa lady officer came up on a car, in a rural road, late at night. The video shows how explosively fast things can deteriorate - Javier Hernandez Morales (the repeat felon) shoots and misses, the officer (Riley Jarecki) mag dumps (15 shots) and kills him. Turns out, Javier was deported three times and arrested and released four additional times over ICE's objections. This whole mess was a consequence of California's Sanctuary State policy. 2018.07.27 ICE detainee with Schozophrenia - Far-left Intercept has an article about an ICE detainee with Schozophrenia that complains about his suicide in custody. Misses the bigger point of whether the U.S. should have to be the worlds mental institution. They were offended that Trump complained that some of these folks aren't the best and brightest that Mexico has to offer. 2015.07.01 Shooting of Kate Steinle - José Inez García Zárate (aka Francisco Sanchez) was arrested innumerable times under a dozen aliases, convicted of felonies on 7 occasions, and deported 5 times, but SF kept letting him go (and wouldn't hold him for ICE, despite many requests) under their Sanctuary City laws. Finally, he stole a gun from U.S. Bureau of Land Management ranger's car, and shot and killed Kathryn "Kate" Steinle on the pier by “accident". Then a California Jury acquitted Zárate of all murder and manslaughter charges, but convicted him of being a felon in possession of a firearm.

Then when one of these repeat felons murder someone, like happened with Francisco Lopez-Sanchez killing Kathryn Steinle, the city plays dumb and claims “who knew?” that a repeat felon, with multiple violent crimes and complaints, and that had been deported many times, was a threat to public safety?

The basic problem is either you believe in the rule of law or you do not. Democrats do not. Not really. They believe you do what you think it right no matter what the law is, then you scream your head off when the other side shows a fraction of the contempt for bad laws that you do.

Can you imagine what would happen if cities in Red-States just ignored the EPA and said they weren’t going to comply with their mandates? They screamed Arizona were racists for wanting to comply with federal law wrt immigration because they disagreed with it. How about if the democrats finally got one of their federal gun-control laws (like the Brady Bill) passed, and all the Red-States/cities just said, “no thank you” and that they were a “sanctuary city” for the Constitution? Or abortion? Imagine they said, “yeah, federal law says that you can get an abortion, but we’re a sanctuary city for the unborn and no abortion doctors will be allowed to practice medicine in this state”. And therein lies the problem.

By undermining the rule of law, the left is setting a precedent that the other side can use too. And when after decades of fighting the criminality of the left, the right will eventually copy their means, the left is going to lose it. And then we get into a much bigger/stronger conflict.

So whether you agree with Trump on immigration or not (and many, many do), they’re still the laws of the land. Either he wins enforcing the immigration laws against sanctuary cities, or we all lose the ability to govern from the fed. If we can’t stop far left cities and states from thwarting federal law — then I’m certainly not going to complain when far right ones copy those methods. Because I care more about consistency of justice than any single program. Thus, while I have no problems with immigration, and think we should make it easier for more people to come here legally, I have a serious problem with a few places just ignoring federal law because it doesn’t fit with their sensibilities.