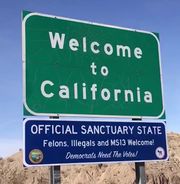 Californians (who supported this), lost their right to ever complain about state overreach again. California arrogantly tried to proclaim that federal immigration law, doesn't apply to them -- and anyone in the state that complies with the federal law, will be victimized by the government of the state.

Imagine the hypocrisy -- in 2010, Arizona passed a tough anti-illegal immigration bill (SB-1070), to enforce federal law -- that the Obama administration was illegally and unconstitutionally ignoring (and failing to live up to his oath of office).

Californians screamed that federal law and powers should trump the state's rights and Arizonan's were assholes and racists for passing or trying to enforce such a thing. Please ignore that California had the same law (called 834b).

In 2012, Californians cheered and got their way as activists on the Supreme Court imagined the Supremacy Clause granted the Federal Government the ability to override the state in policy, but the President had the right to ignore law or legislate from the oval office, as Obama had done (in deciding to ignore immigration enforcement). And that's why AZ was wrong to try to enforce a law that the DOJ wasn't enforcing.

Fast forward 6 years, California flipped 180° and now argued that State powers should supersede the federal (and Presidential) ones on immigration. Jerry (Moonbeam) Brown signed multiple illegal bills, into "law". Not only would some California cities not comply with federal law in sharing suspected illegal aliens felony arrest information nor comply with requests to hold suspected illegal alien violent felons for ICE, but they took it further with the following:

To quote, “California is intentionally obstructing the enforcement of federal law in violation of the Supremacy Clause", the same clause that California cheered on a few years earlier.

Multiple cities either opted out of the Sanctuary State law, or joined the Federal Lawsuit against their state.

If Californians had any ethics and sense of history, they'd be truly ashamed of their leadership. Both for their actions in nosing into Arizona business, and not knowing their own skeletons at the time. Then for flipping and doing exactly what they criticized Arizona for, only much, much worse.