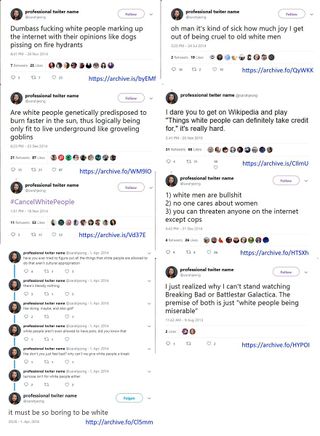 Sarah Jeong is a racist man-hating anti-cop troll with an advanced degree in Grievance Studies, so naturally she was hired as an technology editor at NYT. Not that she has a clue about technology (her pedigree is in Social Media). When people figured out that she's done hundreds of sexist and racist tweets, and complained, the NYT says, "it's OK because she was counter-trolling". (a) They're lying, you can walk her tweets and find plenty that she started (b) they miss the point that almost everyone accused of racism was responding to someone else who attacked them first. This is all fancy wording for saying, "But they did it first", and being wrong about it.

The question is whether racist tweets are right, or wrong, or contextual? The left says that it's always wrong (when the other side does it) because there's no excuse for it, and context doesn't matter.... but it's OK when their side does it, because context forgives their behavior. Like their defense of Antifa and it's OK to punch a Nazi in the mouth, because they're Nazi's. Missing the point that the Nazi's were the ones that made excuses for why it was OK to punch people in the mouth. 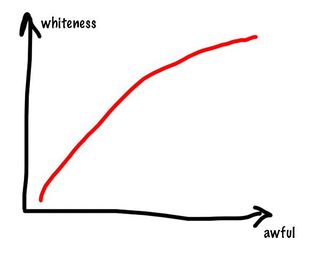 If the left got irony, or knew history, they'd be laughing at themselves. This is a girl who made a career of cheering Social Media mobbing of others (like Tim Hunt, Benny Johnson, Bari Weiss, Brendan Eich, and so on)[1], and complains when the mob turned on her, for behaving worse. Some highlights from Sarah include (just replace white with black to understand if they're racist or not):

Ironically, I (and much of the right) agree that she probably thought she was counter-trolling. Heck, since the left is not self aware enough to recognize their own bad actions, of course she did. Like most grievance warriors she blathers about how it's not racist to insult whites because they are inferior, and then when they respond in an equally insulting manner, she uses that as an excuse to "counter-troll them", and claim they did it first. And the NYT sees nothing wrong with it, because they believe her premise that you can't be racist to whites, so her comments weren't racist.

But free speech isn't made for people you agree with. So defending her, or not firing her, isn't THAT wrong. And much of the right is pointing that out and somewhat defending her right to be an ignorant race baiting cunt. The informed knew the NYT hired racists and bigots, long before Sarah... Sarah just helps prove it. Her biggest crime was admitting it openly. And the NYT biggest crime is getting caught defending her for things they would NEVER EVER EVER apply to anyone on the other side, especially Trump or his supporters. Just because they were calling names back, wouldn't excuse it.

So their defense against this one situational racist, checkmates themselves against virtually every complaint they've ever made against the other side for being racist. Again, assuming they were introspective enough to get their own point.

Stephen Miller summed it up perfectly: I don’t care about Sarah Jeong’s dumb old tweets but it’s the Times themselves who set this standard.