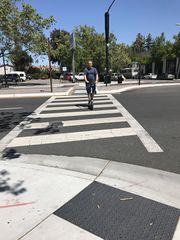 So there's these scooter sharing things going around (we have both Lime and Bird electric scooters in San Jose). They're basically both the same $1.00+0.15/minute to ride. It could definitely be handy for trips too short to want to call a cab, but you want to get there quicker than walking. I used to ride a skateboard, so while I've never really used Razers or other inline non-electric scooters, it was completely natural and easy. And my wife had no problems zipping around on one either. Price seems economical enough to make me want to use them occasionally.

Both also go the extra mile (pun intended), they have an affiliate program so that you can earn money by collecting, charging and deploying the scooters. ($5/each). If you have a panel van or pickup, you could probably do OK in the gig economy, assuming you're also driver for Uber/Lyft and renting a room out using AirBnB.

This isn't that different than the bike sharing... just less pedaling. These things don't have a lot of torque, but if you push off a couple times, they can keep you moving at a good clip. (I think the Lime ones are quicker). Honestly, one rock or pothole, and you're going tail over tea-kettle.

There's a bit of a sham in that they claim "use a helmet"... but not one carries a helmet with them. I've seen lots of people tooling around on them, never seen one with a helmet yet. And like all things, there's idiots out there. I've seen people riding on the sidewalk recklessly, or the street recklessly as well. But I figure you just take the warning stickers off of everything and let Darwin sort it all out. They will come in handy occasionally, but a spill would be most unpleasant.

Segway - I figure business wise, these things are a lot more cost effective than Segway's -- as these are cheaper, lighter, simpler, and nearly as easy to ride. So at what I'd guess is $250 BOM (Bill of Materials / Cost to make one), you can litter them everywhere, and use sharing in a way that was never going to be cost-effective with $5,000+ Seway's. So poor Dean Kamen, he had a pretty good idea about cheap, battery operated personal urban transport... he just over-engineered it. And we didn't have a gig/sharing economy yet, for him to even fathom the sharing business model. Most people know how to ride a scooter, or can figure it out in 30 seconds. A Segway is fairly intuitive, but it does take a few minutes to get the hang of -- and is far more complex engineering wise. The bigger wheels likely make it a little safer from curbs and the like... but scooters with bigger wheels wouldn't be that hard either.

Networking : Bots, Crawlers and Spiders, oh my! • Cookies • EMail • Network Casting and Subnets • Never trust the Internet • Web Basics • Web Search Basics • What is DNS? • What is a WebApp? •