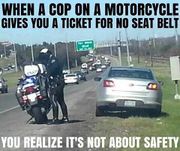 A law is the point where you say, "people that don't agree with me, must be punished and have their rights taken away"... either with loss of property (fines/taxes), loss of freedom (imprisonment), or death (if they resist). With that in mind, now think of seatbelt laws: if you don't wear something that 80% of the time will help your safety, and 20% of the time will endanger it, we will steal your property, liberty or kill you... for your own good, of course. Does that sound like a good use of law or government authority? We know that the laws have resulted in people losing their cars, liberty or even life, either that was intended, or laws come with unintended costs.

If you know math, you understand the differences between averages and individuals. While seatbelt laws do reduce injuries or fatalities by around 8-9% (depending on who is measuring and how), that's not a huge amount -- and that's average. What you have to remember is when you look into cases, there are many who will die or be hurt worse by seatbelt laws (or wearing seatbelts) and a few more that will be saved or hurt less. In average, everyone wearing a seatbelt, is theoretically a net win... which is why I wear mine. But in individual cases, forcing everyone to wear a seatbelt will kill or harm some people. (Common deaths are caused by being unable to detach a seatbelt in a fire, rollover, or in the water -- which can kill the wearer).

More than that, while the theory is that it'll save lives, the practice is, we have no evidence of it.

If you examine the highway fatality statistics, which have been kept since at least 1950, you'll find no sign of influence from state seat belt law, just the inexorable decline in fatalities per mile we've seen ever since we started keeping those records. Of course, we measure them at fatalities per million miles driven now. Seat belts probably save lives, but so do radial tires, which keep cars on the road far better than did bias ply tires. There's a lot of nuances (like Speed doesn't kill, but the differential between speeds does). The safest practical driving speed is about 2 mph than is the flow of traffic, regardless of how slow or fast that traffic flows -- and with that in mind, the States decided to put high speed HOV lanes, next to low speed parking lots, and got the expected increases in accidents and fatalities as a result. While fining us for not wearing seatbelts. Gee thanks.

Do seatbelt's make you less safe? In some cases they do. Partly directly, and partly due to The Peltzman Effect. In 1975, Peltzman showed that "offsets (due to risk compensation) are virtually complete, so that regulation has not decreased highway deaths, because people just engage in riskier behavior (under the illusion of being more safe). Thus, the law just took away free will, for no measurable net positive effect. Helmet Laws are an even more obvious place where the Peltzman effect rules, when Helmet laws have shown no net differences before and after in number of fatalities, and in fact hint at the opposite. (That wearing a helmet increases risky behavior and thus more than offsets the safety equipment benefits).

I have no problem with people making either choice, on their own. Like I said, I lean towards wearing mine. But forcing others to make the choice you think is better for them, even when it will cause some of their deaths, is actually a pretty shithole move. Education, influence, encouragement, all good things. Forcing them to do something that will kill some of them, means YOU own the consequences of that action (instead of them owning it). And while we can do the gruesome calculus of saying, "these three will live, but that one will die because of that policy: oh well, sucks to be him" is a dark, dreary society. Basically, you're not just deciding the Trolly Problem for yourself -- you're deciding to force your answer on to everyone else. And that's a pretty dick move, if you ask me.

I'd rather let them make their own choices in life, and NOT own the consequences and have their blood on my hands, than be the big-government Nanny-state person that kills others for my causes. But that's why I'm not a progressive.