Democrats leaked to the Democrat Press (WaPo), that Trump used the term "Shithole" to refer to a few countries (that are shitholes), while in the immigration debate. Then both hypocritically made a stink about a nothingburger for many many days of 24/7 coverage, while ignoring all the important points. There's deeper issues here, but the mocking of the term (or the defense of it), just divided us on partly lines because making stink over Trump's style (and what the Dem side did too), isn't going to persuade anyone who doesn't already hate Trump of anything. The thinkers will be outraged at what's went on behind the curtain of FakeNews and histrionics.

If Trump is a racist, it would be pretty easy to see: it wouldn't be ambiguous quotes taken out of context, it would be seen in obvious contempt and avoidance of those of lesser races.

Real racists don't like other races, they think theirs is superior, and resent the over-breeding of others, and mixing. If he was a real racist and wanted to eliminate blacks and latino's, he'd be for Planned Parenthood, for the same reasons Margaret Sanger started it:

According to Dems, the moment you run on Republican ticket, is the moment you change your entire world view from avowed diversity guy, to instant sexist/homophobic/racist... and their gullible base buys in. Either the Democrat leadership are ignorant and know none of this, or they're willfully and intentionally lying to divide the nation, and sabotage Immigration reform, because politics is more important than the people they could help. Pick one.

If the Dems played this as they want some compassion in immigration: fine. I agree. But they lied, and pretended they didn't know what he wanted, or that he's a racist for wanting to reward the best and brightest... as he campaigned on. All of that is a fraud, or a lie. 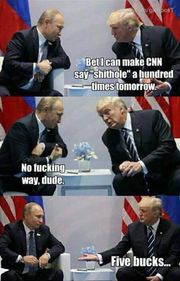 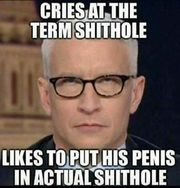 People can be offended, or not. I don't really care. There are those with legitimate grievances against the crassness. The problem is the 95% are making the rest look bad.

People will usually then be outraged and proclaim, "A President should know better, who has said anything like this?"

Now of course partisans trying to resolve their cognitive dissonance will ignore the point that the media is never offended at Democrat vulgarity, but always at Republicans softer and more appropriate ones. And they'll try to twist it into, "But he was calling their country a "shithole", instead of just insulting individuals or committing the crime of indecent exposure. And when you point out the historical double-standards, instead of getting the point, they'll say, "you're using whataboutism" to excuse your side. Which is another fallacy, as the point isn't excusing a high crime, it's about the morally acceptable standards by Democrats, that they won't apply to the other side.

Trump denies the claim, the only source they have is not credible, and the media makes that "everyone knows it's true" based on their own non-supported reporting of the fact, then the media takes it to the next level and claims the Ambassadors to Haiti and Panama resigned over this non-event (and later have to retract). [10] Is this really what Journalism has sunk to? 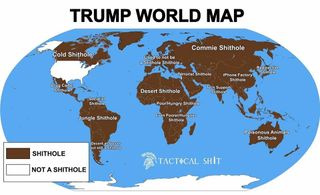 Both Trump and the Republicans in the room, said that he did not say this.[11]

The only people that claim otherwise are Dick Durbin and the Democrats, who needed to distract from what happened... and of course their propaganda rag, the Washington Post.

If you know anything about the source (Durbin), you know he's an inflamatory liar when it comes to topics like this.

So to the informed, Durbin is not a credible source in a he-said, she-said about the Republicans. But good enough for Democrats, CNN and WaPo, of course.

The fact that this whole stink can be made up by one Democrat, because it fits an anti-Trump narrative at CNN and WaPo, and that none of them will mention one of the times their side said worse and somehow THIS is what the immigration debate is about, is what the whole fight over FakeNews is about. The more you listen to CNN, the dumber, more hateful, and less informed you get. 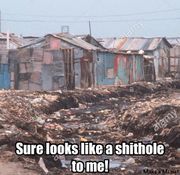 Would you want your kids to grow up in those places? I would not wish their infrastructure, education and quality of government on anyone. Because it's a shithole.

The rice institute did a map of where the most open defecations happened -- and other than San Francisco, Africa is the shithole capital of the world.[16]

So as usual, after the Democrats tried to torpedo another immigration opportunity by dishonestly spiking the goals, leaking a paraphrased quote out of context, then fanning the flames by trying to play it as "racist" for a President to say that some countries are inferior to others -- and we shouldn't favor people based on their victim cred.

Then they did the usual, and tried to make it about ignoring some facts for others. One fact is that immigrants from these poorer places often perform well in the U.S. I concede that. But that doesn't change the morality or fairness of prioritizing people from those countries, in larger amounts than ever before -- over countries that have higher educations, more cultural similarities, and don't have as many terrorists and deadbeats in their midst. Countries get to pick who they let in. The self-deluded can see color as the only motivation... the realists can see education, culture, income, and other things as well, as Trump's side has a point.

The Clinton's made hundreds of millions as public servants helping places like Haiti, and the results can be seen in the numbers:

If you're a compassionate person, you wouldn't wish that on your enemies. 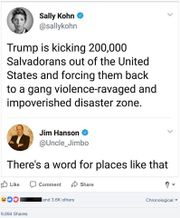 Trump referred to El Salvador as one of the shithole countries, and has been working to end TPS status (with enough time to give folks a chance to legalize).

The left wants to deny that some places are shitholes, and simultaneously vilify Trump for sending people back to those shitholes. Which is it?

How dare the evil, vile Trump, send people back to places like El Salvador? Which are lovely, well managed countries. Other than the corruption, crime and rape culture. [18]

In 2001 there was an earthquake and so El Salvadorians were granted TPS (TEMPORARY Protected Status) while their country was in turmoil. That status was extended for 18 months at a time, ever since. At some point, this became a sham -- it was no longer temporary status, but subverting the spirit of immigration law.

So the Trump administration gave them another extension but also said they must legitimize: get a real green card, or legalize their stay in ways other than just abusing the TPS system, which was designed for temporary status, not forever refugee status. And for that, the left has lost their nut (as usual). How dare that callous Nazi bastard obey the rule of law like that, and stop abusing it like prior administrations did. [19] I think the left stopped trying to make sense, because it's unnecessary for their base: just tug a heart string, and their brains shut off. 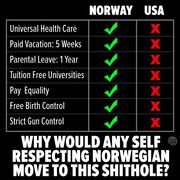 The far left is making a stink about how much better things are in Scandinavian Countries, and why they don't come here from there?

And they ran some articles in their far left rags about how great it is over there omitting the 86% tax burden, or all the negatives of the Law of Jante (herd think), and how small their living spaces are, their weather, and so on... and focused all the social benefits. Please don't notice that about 4.5% of the U.S. population (nearly 12M) came from there and integrated quite well. Just notice that in the past few years the flow has been loosely equal -- with the U.S. giving them our naive pseudo socialists, and them giving us their entrepreneurs and people who wanted a little more liberty in their daily lives. Like the right to buy Ovaltine (something that is outlawed over there). 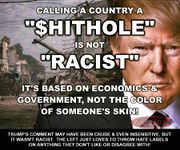 A friend summed up my views, "The man is a crass egocentric billionaire; not a racist megalomaniac."

The evidence of Trump being a racist just proves to me that 40 years of not teaching critical thinking, logic and reason in our schools has taken it's toll, when people can't tell the difference between their emotions and an unsupported opinion, and what we know.

So you can claim Trump is wrong, to NOT make our immigration into the social justice program that the left wants. Fine. I get that. And I'd try to mix more humanitarianism than he would. I could have been more on the Democrats side, if they'd just been honest about what this is about. But you're a liar or a fool, if you claim you didn't know what he wanted, or pretend that he's a racist for getting mad because they didn't come to the table with a sincere effort to create a meritocracy.

And if you're dumb enough to scream "racism", I'm going to point out that racism looks more like what the "Diversity Lottery" than a meritocracy. Saying that you deserve special immigration status because you're black is more racist than saying we should try to skim from the highest education countries in the world. Being a victim of a corrupt and failing government, is not a merit.

So I'm more offended by a dishonest (or incompetent) Democrat/Media ploy, than Trump being Trump. Even when I don't agree with Trump. And the more hand-waiving distractions the left/media does to get the gullible outraged, the more I go to Trumps side, than if they just laid out the facts and let people make up their own minds.