Progressives are full of good ideas on how to spend other people's money on ways to avoid blaming criminals for their actions. This one was by spending ≈$250,000/square mile (or about $60-90K/sq mi in yearly reoccurring costs), you could detect and send cops to scenes of shootings. And liberals who watch too much CSI pressed many cities to adopt the expensive systems.

How are they working? 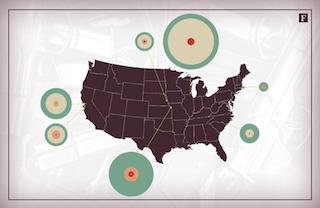 I'm not against technology, or certainly not against things that might stop crime or result in faster response times. But the truth is that most people report gunshots. Place that don't, do not because of slow police response times -- which aren't improved by spending their money on listening systems instead of on more cops and/or training. And since the gross majority (76%+ in the worst cities) are called in anyways, and it doesn't change response time, the cost per arrest, is astronomical. Of course that's hard to calculate when most won't report the actual costs (and certainly not the cost per false alarm).

So if your city is good at police work (fast response times) and the community trusts it, this won't matter -- since the data is redundant and at worst it's a lot of false alarms that decrease quality.

But if your city is bad at police work (slow response times), then they aren't going to respond quick enough to matter, and it will do nothing to change the relationship between the police and community.