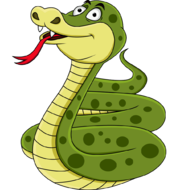 As a kid, I used to catch snakes and sell them to pet stores. I read about 20+ books on snakes, and had lots of first hand experience. I've been bit many dozens of times: but never by venomous ones -- despite catching a few of them, and keeping one as a "pet" for a while. After a while, I got good enough, that I'd use my left hand a lure, and when the gopher snakes would strike at it, I'd reach out and grab the snake in air (neck) with my right hand, so it couldn't bite. If you missed and weren't close enough to the head, it would get you on the wrist. King snakes, garter snakes, racers, wouldn't usually coil and go into strike mode for that to work (they just swam away quickly) -- you just had to pick them up, and get bit. My rattler technique was a lot more conservative and involved a stick: but I don't suggest it. Usually I just killed them and made things out of their skin.

People are scared of poison warfare: and for good reason. While I've never been bit by a venomous snake, I have been Black Widow bit: and it is NOT pleasant. If you have the option to avoid it, I would highly suggest doing so. That goes doubly so for snake bites.

Most people bit in the U.S. are handling or catching them. Your odds of getting bit, go down dramatically, by just not picking them up. In the U.S. for venomous snakes, there's pretty much: Rattlers, Copperheads, Cottonmouths, and coral snakes. [1]

The coral snakes have a neurotoxin, which causes things like paralysis, slurred speech, and often kills by cutting off breathing or stopping the heart. The deadliest snakes in the world (Cobra's, Mamba, Crate, Sea Snake, etc), have neurotoxins which can kill quickly. The coral is a milder variety but can kill. Fortunately, it's a small, very shy snake, with a small head (mouth) and fangs in the back -- so it kind of needs a finger or something small or loose skin to bite, and they're so docile that you could probably pick one up and NOT get bit. But I wouldn't suggest trying, for the same reason I think Russian Roulette is a stupid idea.

The other snakes in North America are hemotoxins, that work by destroying blood and tissue -- and it has anti-coagulents and other things to evade or destroy your bodies defenses. The good news is while they can be a little more aggressive than coral snakes, there are very few snake deaths, because snakes just want to be left alone -- and most bites are survivable.

Aggressive: There are stories about cottonmouths coming at people, but a couple studies show that's not a normal behavior: they are reluctant to bite, and just want to get away -- though the threat behavior of opening mouths, or sometimes if a person is between the snake and the water, the snake will try to sprint to safety, and to the human that looks like they were coming at them. Catching many dozens of snakes over the years, I only got one gopher snake pissed off enough, that it actually came at me biting and chased me back a bit. But again, that's likely more a threat display to get you to leave it alone, than an actual chase you and try to get you attack. [2]

Adult males, bit in the leg by a rattler, could probably go home and just sleep it off -- and by that I mean they'd survive with a nasty area where all the meat/muscle died, but they would live. But that would be stupid: seek help, there are way too many potential complications, and if the snake hits a vein or gets you in the upper body, it's a bigger deal. You're probably not going to die, but it's going to be a bad week (or more).

I'm not kidding here: snakes are zombies. They have a relative primitive nervous system, and just because they're dead, doesn't mean they can't still do things like bite you. And for rattlers, their venom can crystalize and do harm to humans years after they're dead, if you ingest it or get it in a wound. So don't do that. That's why it's common practice if you kill a rattlesnake, you pull/cut it's head off, and bury it.

I did that once: saw a larger rattler with a friend, I stopped him (he hadn't seen it), and I smashed it's head with a rock, then pulled it off with my boot, and buried the head. He asked "what for" and I explained that they can bite after they're dead, and he scoffed. But we were trading off carrying the snake home (since it was probably 5' and 8 lbs), and he wanted the skin for a hat band, and they are fairly tasty (we fried them in cornmeal and seasonings like chicken or frogs legs). After walking for about 15 minutes the bloody stump turned and struck him in the upper/inner arm. He screamed like a 9 year old girl and a haunted house and dropped it -- with a bloody schmutz on his arm. He was panting and couldn't believe it had just happened. Since there was no head attached, it just made a small bloodstain, but he fully believed me after that. [3]

Remember, snakes are highly fragile creatures. They don't have arms to break falls (short falls can kill them), and they're swimming around on their ribs: you can step on them, shake them, whip them against the ground, and they die. So they don't want to bite you, because even if they are venomous, their poison isn't quick enough to guarantee that you aren't going to kill them too. And biologically, killing each other is not a win for the snake. Even when rattlers do bite, 30-40% of the time, they dry bite (just to scare you). They don't see you as prey (unless they're molting, so can't see well, and only sense a small part of you, like a toe), and they lose most fights with predators, so they just want to go home.

Snakes are so naturally, non-aggressive, that I would catch snakes in the wild and tame them in a couple weeks (at most). How do you tame a snake? Just convince it you aren't going to eat it. When you reach for them, they think you're going to kill them -- so they will bite. And they have lots of little sharp teeth. (And if you pull back after they've chomped down, you'll probably break some off in you, and have to pick them out like splinters). But the non-poisonous ones really scare more than hurt. It's like a soft pinch with pliers, with a few needles in the pliers. Their jaws are for holding, not chewing, so Bee or Wasp stings are worse... even lizards (which I used to catch as well), usually have a stronger bite. But back on topic... they really don't want to bite, they're just scared.

So the first time you reach for them, they'll bite. You catch them (hold their head down with a stick, and pick them by the back if the head), and hold them for a few minutes, firm enough that they can't get away, but not squeezing enough to hurt them. After 5 minutes or so, you just let the head go. The snake will try to get away, but it realizes that if you wanted to kill it, you would have already, so I'd not usually going to bite. (Especially if you don't stick a hand in its face). After holding it for 10-20 minutes, put it back. And rinse and repeat daily.

For the first few days, if you reach in with your hand, it may strike at you, "leave me alone". But once you pick it up, it's not likely to bite -- though sometimes it will bite others near you. (This leads to a technique I used to use to catch snakes with a friend. I'd pick it up by the middle quickly, and it would generally bite the person I was holding it next to. Then I could get it's head and pry it off while my friend was cursing at me for using him as a chew toy.) Anyways, back on topic -- they don't want to bite things (and piss things off) that can kill it. So the first few times you reach it, it strikes out of fear. Over time, it learns, that you're not going to hurt it, so it just gets used to being picked up, and doesn't strike any more. That's all there is to "taming" a snake.

Snake Handlers: That's why snake handlers can handle snakes. The same technique works with rattlers. You could pick them up, hold them, convince them you're not going to hurt them, and if you let the head go, it's probably not going to bite you, as you're not a threat. However, I strongly recommend against it. Here's an article on snake handlers:

But note, snakes aren't that smart -- and they have reflexes. I had a corn snake as a pet, and it was shedding (their scales turn white and opaque and they swim out of the older, too small skin, and get a new looser one to grow into -- but their eyes go opaque for a short period as well, and they can't see, and must rely on their sense of smell/heat). It had been a pet for years, but one day my hand got too close to it's head, and it latched on (while riding with it around my neck on a bike). I was able to keep cool, ride over to the grass, put the bike down, and the snake into the grass, and as it moved it's jaw up my hand, it realized this wasn't a mouse and was too big for it to swallow, so it let me go. Again, they aren't rocket scientists, but they do know what they can and can't swallow.