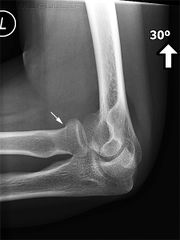 So I'm minding my own business, walking down the stairs and swoop -- my feet hit something slippery on the edge of the step, and shot out from under me.

My arms go out, and my right catches the bannister, my left braces behind me on the stairs and I go down pretty hard. Ouch.

I bounce up pretty quickly, and finish descending the stairs, and go to the couch to writhe around a little bit.

My right arm had "Frozen Shoulder", so had limited mobility -- and my falling had made it extend far further than it wanted to go. I felt the "woosh" I get when something bad happened, but my right shoulder was in searing agony, and there was nothing I could do until the tidal wave of pain was done washing over me. I'd broken my arm 4 times before that, not to mention a couple toes, those were usually a 7 on the pain scale of 1-10, this was a 9.5, with a 10 being an angry toothless badger gumming my testicles off.

After about 3-5 minutes, I could speak and the pain was dying down to a torrential scream. My helpless wife was looking on and I explained what happened. And I started to notice that my left arm hurt too (at the elbow). Meh. I got pouty (as I do when I'm in serious pain), and went upstairs and watched TV in man-land (my den).

The right shoulder pain went away after 15 minutes and was fine. Which allowed me to notice the throbbing in my left arm. As long as it wasn't trying to shout down the shoulder pain, it was quite loud and persistent, and the frozen vegetable mix wasn't doing much to sooth or numb it. I had an appointment in the morning (Saturday) with my Physical Therapist for the frozen shoulder anyways, I'd get them to look at the arm. I took 2 aspirin and slept poorly over the din of throbbing.

The next morning I went in, they X-rayed it for me, and said, "Yup, you broke it". Something about a sail sign and a fat pad elevation -- but I should go to the E.R. and have them deal with it. So I went to the Doc-in-the-box (the urgent care, not the E.R.).

I told them what happened, and they said, "OK. We don't need X-Rays, we'll take your word for it -- and they splinted my arm, and told me to find an orthopedist on Monday. Not impressed. As a Martial Artists, I was aware of the concepts of RICE: Rest, Ice, Compression, Elevation -- and leaving things alone to heal. But I found an orthopedist, and saw her a few days later.

Well, the Orthopedist said, yup, it was a Radial Head fracture -- basically, if you pushed a the ball of a snow-cone down into the cone. Basically, it pushed the elbow knuckle into the bone a bit (made it shorter), and split the end very slightly. The basics, were, I shouldn't wear a cast/splint, I just couldn't carry anything heavier than a coffee mug for a while -- but I could keep using it, and had a sling just to hint to others to not touch or bump it.

It's a milder fracture, but it was all swollen up and unmovable. So she stuck a needle into my elbow and drained 10cc of blood out. That wasn't pleasant. Once the local (that didn't do much) wore off, the arm throbbed like I first broke it. (It preferred being locked up with fluid). But after a few days it wasn't that bad.

6 weeks later, since the bone didn't fall apart, it meant I didn't need surgery. (It had knitted and was healing). And other that some clicking/popping/locking occasionally, that we watched for another 6 weeks, it was an easy break, and not that bad at all. Hardly inconvenient at all.