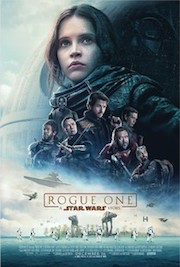 This one was much better. It was a bit slow in the beginning-middle, and then was really intense in the last half. But there was a ton of things getting tied together, closing up loose ends, it had mature dialog, some really good one-liners, people behaving somewhat reasonably — and still being consistent with the feel of a Star Wars movie. It was the perfect bridge between episodes 1, 2, 3 and 4, 5, 6 — with plenty of nostalgia and canon, and plenty that is new (even if it was yet another in the series of blowing up the Death Star). It was not quite as compelling on it’s own. My wife’s response (as this is the first Star Wars she’s ever seen) was, “I preferred Guardians of the Galaxy”, but then she didn’t understand why Dearth Vader had magic powers.

So if you like Star Wars, you have to see this one. I thought it was far better than the last Star Wars (The Force Awakens), and that wasn’t bad: it was just much more a rehash, whereas this one took you to places the others hadn’t gone as much. If you have to see a Star Wars movie, and have never seen any of them: then this is the best writing/story (for me), but episode IV was more pioneering and stands on its own a bit better. But I definitely left the theater with this movie exceeding my expectations.